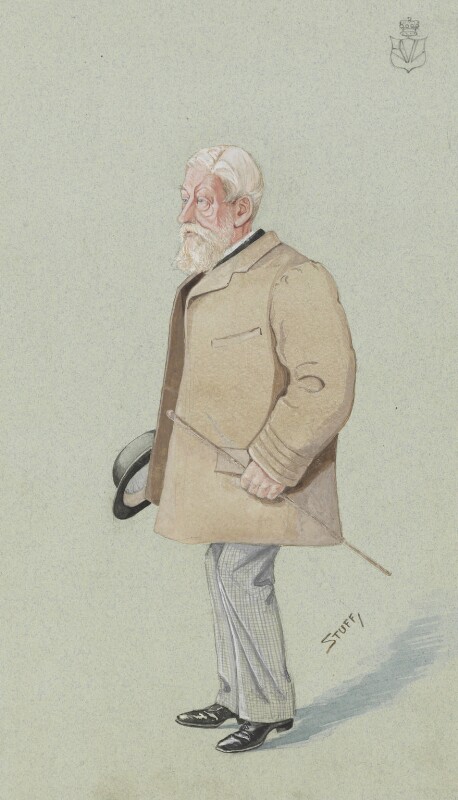 In November 1938, at the end of a golden decade for its Vanity Fair cartoon purchases, the National Portrait Gallery acquired three of four lots of ‘original drawings of cartoons for Vanity Fair’, at a sale at Hodgson & Co, 115 Chancery Lane, London. [1] The cost of the 52 drawings was £17.5s. The majority were by Sir Leslie Ward (‘Spy’) but two were by ‘Stuff’: NPG 2972 and NPG 2995, of Sir John Rigby, Solicitor-General; both were drawn in the 1890s. [2]

Harold Wright, who signed ‘Stuff’ (or ‘Stuff Gownsman’ or ‘Stuff G.’) was a lawyer who rose to become stipendiary magistrate for North Staffordshire from 1893 to 1904. [3] He was also a brilliant amateur cartoonist. In an interview with ‘D.W.’ of the Sketch in 1893, cited in the Windsor Magazine in 1896, [4] he explained how it all began: ‘When I was called to the bar [in 1880] I used to amuse myself with sketching in court.’ His drawings of the Parnell Commission, published anonymously in 1890 as by ‘A Stuff Gownsman’, brought him to the attention of the editor of Vanity Fair. [5] He went on to produce 23 caricatures for the magazine, published as chromolithographs between 1891 and 1900. Wright specialized in legal caricatures until 1893, when his own appointment as magistrate made more such subjects impossible. The NPG owns drawings for seven of the 23 caricatures that Harold Wright produced for Vanity Fair. [6]

In 1893 the journalist ‘D.W.’ quizzed Wright on his future as a cartoonist: ‘“Since you have been in the Potteries I suppose your pencil has been less busy?” “Well, yes: except that I’ve promised my old friends of Vanity Fair to give them now and then some cartoon of a ‘Staffordshire worthy,’ I do little or nothing.”’ [7] Wright’s drawing of Arthur Wrottesley falls into just this category. Characteristic of ‘Stuff’ is the finely drawn head, particularizing the lineaments of the face, and the stance – here an aged foxhunter’s crouch; and the whole adds up to a mild-mannered caricature by one Staffordshire gentleman of another.

An inscription at the top margin of the drawing notes that the likeness was made on 20 May 1895, in Stafford. A month later, 20 June 1895, the chromolithograph by Vincent Brooks, Day & Son appeared in Vanity Fair (Statesmen – no.DCLIV, captioned ‘A Staffordshire Peer’). Of the baron’s coronet and coat of arms in the drawing only the coronet appears in the print, which is in every other respect faithful.

In the critical literature on Vanity Fair and 19th-century illustration, and on the internet, [8] the acronym ‘Stuff’ is routinely and mistakenly linked with the illustrator and war artist Henry Charles Seppings Wright (1850–1937). [9] The mistake took root in the 20th century. However, the two articles of the 1890s mentioned above establish beyond doubt that ‘Stuff’ was the nom de crayon of the lawyer Harold Wright.

Whole-length, three quarters to left, standing, white hair, moustache and beard, wearing a beige covert coat and grey check trousers, carrying a homburg hat in his right hand and a riding stick in his left.