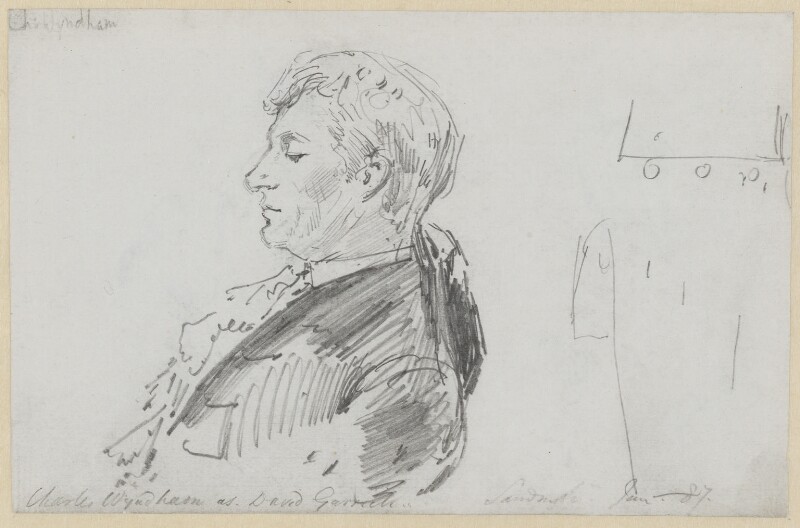 This quick sketch is included in a collection of eighty-six miscellaneous portrait drawings (NPG 2282-2348, 2370-2390) that were given to the National Portrait Gallery by Sydney Prior Hall’s son in 1929. It shows Wyndham in his most famous role, playing David Garrick in the production of the same name. The inscription and precise dating indicates that it was taken from life during a command performance of the play that was given for the Prince and Princess of Wales at Sandringham on 7 January 1887 at 10 p.m. [1] The Prince (later Edward VII) was reportedly so pleased with Wyndham’s revival of the role at the Criterion Theatre in 1886 that he ‘commanded’ a special performance of it early the following year. [2] This took place in Sandringham’s Ball Room, which was decorated with Indian arms and armour brought home by the Prince from India, and was held to mark the occasion of Prince Albert Victor’s twenty-third birthday the following day. [3]

The artist’s rapid pencil marks impart a sense of immediacy and suggest that he captured this pose ‘on the spot’ during Wyndham’s performance. Evident are the eighteenth-century frock-coat, frilled shirt and dark hair ribbon characteristic of the multiple studio photographs produced during this period, showing the actor in character in the play (see, for example, NPG x12580). Hall was a painter and leading illustrative journalist, who worked for the Graphic from its foundation in 1869. Comparable sketches of Mary Moore as Ada Ingot (see, for example, NPG 2370) and David James as Simon Ingot (NPG 2374) made at the same time suggest that these portraits were used as preparatory sketches for the artist’s finished drawing of the performance, which appeared in the publication as a full-page illustration later that month (see ‘All known portraits, In stage character, David Garrick, publ. 1887’). [4] He chose to represent a scene in David Garrick’s study, where Garrick comforts Ada, overheard by her father Simon Ingot, who has entered unobserved. [5]

It was the first play performed [at Sandringham], and on so small a stage the quick scene-change in the last act was testing. At the Criterion they could manage this with a whole battalion of stage-hands, and now as many as forty of them went up to Sandringham when the Prince assured Wyndham he wanted everything done as it was in the theatre. But where could such a large gathering have supper? At the local inn, Wyndham thought. Not at all: the Prince insisted that everyone would come to Sandringham: ‘They would like it’. They did; and he looked in on the men during their meal. The players supped with the royal party in the conservatory; a nervous Mary sat beside the Duke of Clarence [Prince Albert Victor], who held her fan, made appropriately of three ostrich feathers. [6]

A series of smaller sketches on the reverse of NPG 2373 include a smaller portrait sketch of Wyndham, or possibly another actor in the performance.

For other portrait drawings included in H.R. Hall’s gift to the Gallery see NPG Portrait Set ‘Miscellaneous drawings: The Parnell Commission, Members of the House of Lords and the House of Commons by Sydney Prior Hall, circa 1886–1903’.

Given by the artist’s son Harry Reginald Hall, 1929 with other sketches.