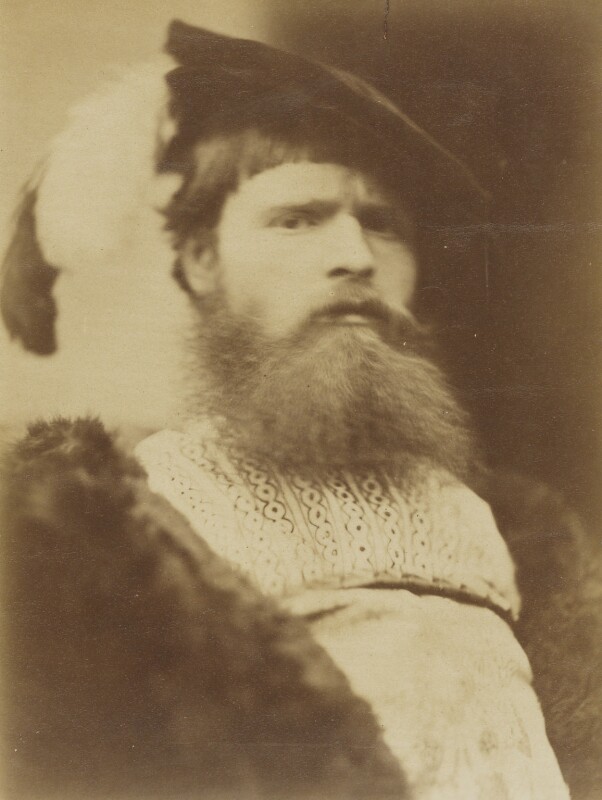 This image was created during the 1860s, evidently as part of David Wilkie Wynfield’s series of artists portrayed in historical and contemporary costume, many of which were released for sale from March 1864 under the title The Studio: A Collection of Photographic Portraits of Living Artists, taken in the style of the Old Masters, by an Amateur. Three or possibly four different portraits of Yeames by Wynfield exist and all show the sitter in fancy dress. Additionally, Yeames appears in several of Wynfield’s more informal photographs showing members of the St John’s Wood Clique in a social context.

One of the costume shots was registered for copyright on 8 December 1863 and given the title ‘Photograph of W.F. Yeames in Medieval costume, bust, full face’. [1] This probably describes NPG P88, where Yeames is in fact shown in Tudor-style costume, wearing a plumed cap in the manner of Henry VIII and a decoratively smocked shirt under a fur wrap. Alternative poses show him wearing a hat without plumes and different attire (of the same period), which may indicate that more than one sitting occurred. Morris and Milner note that the sitter’s commitment to Tudor and Stuart subjects in his oil paintings outlasted that of the rest of the St John’s Wood Clique. [2]

Yeames's biographer and relative M.H.S. Smith maintained that the photographs of his uncle were not as effective as others produced in the series: 'Perhaps it was because, being very short sighted, his eyes would take on the blurred look of a near-sighted eye if bereft of glasses, for, as Wynfield always liked to take his portraits in costume, spectacles seemed rather out of place' [3]

Artist and sitter were closely associated. They held studios in the same street during the early 1860s and upon Yeames’s marriage to Wynfield’s sister, they became brothers-in-law. It was Wynfield who first enlisted in the Artists’ Rifles and then, according to Henry Stacy Marks, ‘induced Yeames and Hodgson to become recruits’. [4]

Half-length to front, in historical costume with plumed cap and smocked white shirt.

Victorian Worthies, Alexander Gallery, London, 1976 (6). It is not clear which of three known versions was exhibited.