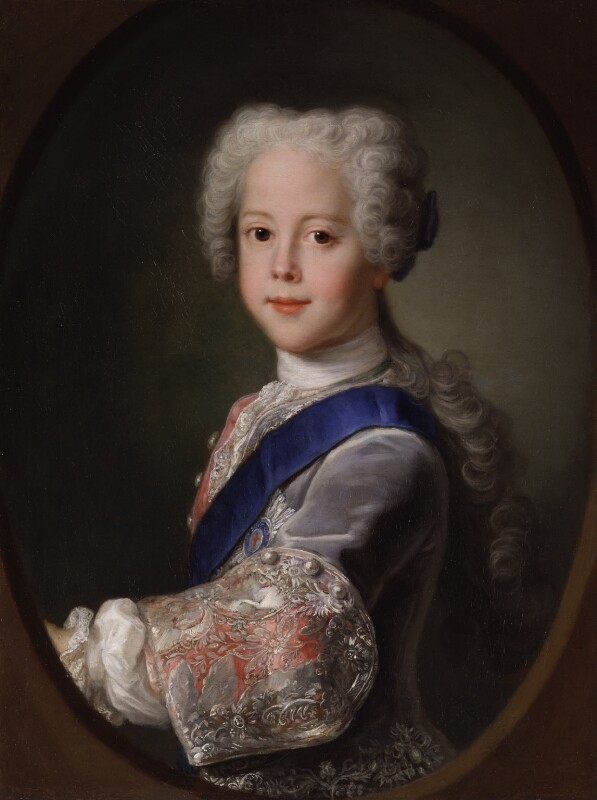 Formerly given to Largillière, NPG 435 is a studio quality version of a popular portrait of which numerous versions and copies exist. Signed and dated examples are in the Scottish NPG (888), [1] and in the Borghese-Aldobrandini family, both signed Ant. David pi Anno 1732. In addition, there are versions in the collection of Sir W. Williams-Wynn, and in the possession of Comte Guy de Villefranche, who states that the portrait was given by the sitter's father c.1732 to the Marquis de Villefranche. There is another at Lochinch Castle (Earl of Stair), and one described as after Largillière was at Sotheby's, 28 July 1967, lot 181.
For further discussion of artist and date, see Prince Charles (NPG 434). Briefly, there is a payment in 1729 'p. il Duca'. [2] James' letter to Lewis Innes of 8 November 1729 - 'You will probably have seen my son's [sic] pictures wh I sent to Mr. O'Bryen, they are very like, but look a little older than the life' - is connected by Miss Stuart-Wortley with the pair by David of Charles and Henry. [3]

Bought, 1876, from Alexander Fletcher with NPG 433, James Frances Edward Stuart, the 'Old Pretender', and NPG 434, Charles Edward Stuart, the ‘Young Pretender'. All were attributed to Mengs, as was a portrait of Maria Clementina Sobieska, also offered by Mr Fletcher, in addition to a portrait of Cardinal York, attributed to Rosalba. He stated that he purchased four of them at the sale of York's secretary, Count Malatesta, to whom it was believed they had been bequeathed by the Cardinal. [1]

The type was engraved in reverse without the Garter ribbon and star, anonymously, in line (F. O'Donoghue and (Sir) Henry M. Hake, Catalogue of Engraved British Portraits ... in the British Museum, 1908-25, 5).