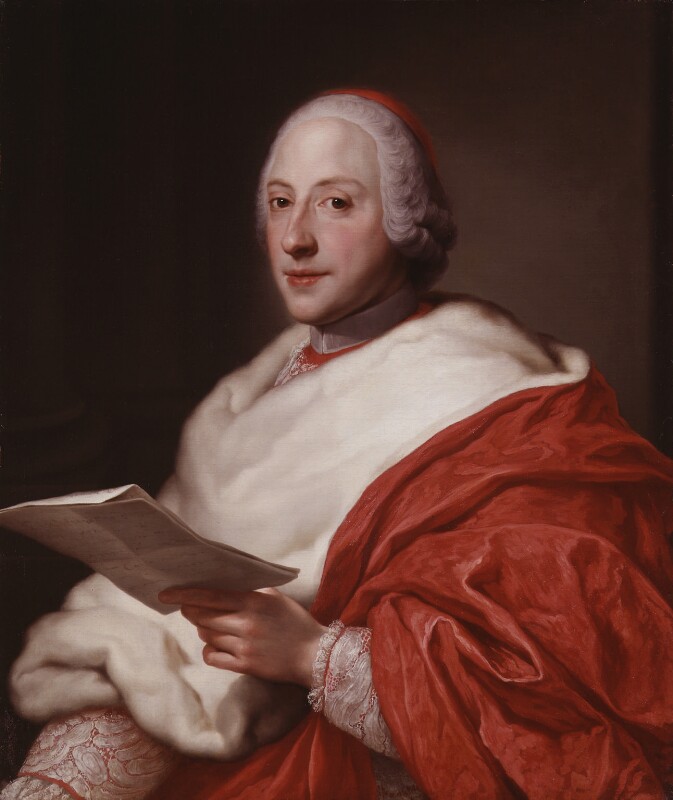 The date is uncertain; 1774, suggested by Emmerling [1] but for no firm reason, seems too late for the apparent age. An engraving by P. A. Pazzi after an unnamed original and published, to judge from the lettering, soon after he received the cardinal's hat, appears much closer to his actual age. The face-mask of NPG 129 is in fact very close to the signed and dated Blanchet whole length of 1748 sold at Hamilton Palace, Christie's, 8 July 1882, lot 1116, and now in the Darnaway Castle collection. Although NPG 129 is likely to be an early copy rather than a product of the studio, the assurance of the presentation argues a Batoni original, albeit one not now known. [2] The only known reference is in the Stuart Papers. York sat to Duprà for a new portrait, which was copied by Batoni for Prince Charles, then in Paris, 'Pompeo at last has finished my Picture, it is finely done, but to tell you the Truth it is not well copied from the Originall ...'. [3] Baton's copy was a miniature, paid for on 21 September 1744. As this was before York was made a cardinal, it can hardly be connected with NPG 129, and merely strengthens the case for postulating a lost Batoni type.

1) Ernst Emmerling, Pompeo Batoni, 1932, pp 35-36.
2) I am grateful to Michael Levey for his comments on this picture.
3) Michael Levey, The Later Italian Pictures in the Collection of Her Majesty the Queen, 1964, p 25, citing Miss Stuart-Wortley; see All Known Portraits.