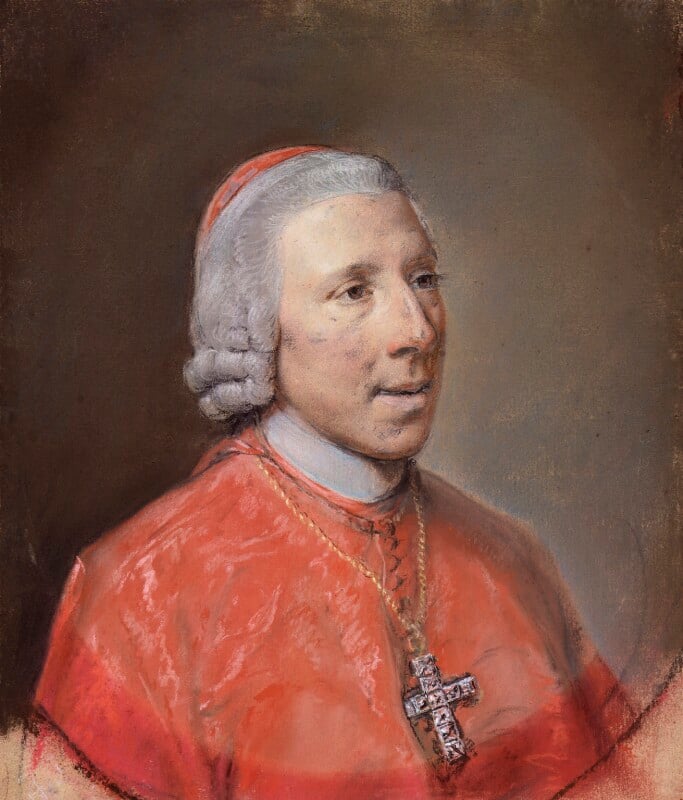 In 1888, Scharf attributed this to Rosalba. [1] However, this is a typical example of H. D. Hamilton's work, and in 1938 Miss Stuart-Wortley discovered a receipt from him in the Stuart Papers at Windsor, dated 12 July 1786, for 'A Portrait of His Royal Highness the Cardinal York, 20 Sequins'. Mention in an account book makes it clear that this was 'in Pastella'. The payment is probably for two drawings, as an account of 3 ½ sequins, 13 October 1785, was for 'three Pictures of Madam the Duchess of Albany'. NPG 378 was probably done in Rome; Hamilton went to Italy in 1778 and returned to Ireland in 1791. There is another half length version at Stanford Hall (Lord Braye) purchased by Lady Braye in Rome in 1842 presumably from the Marquis Malatesta, the nephew of the sitter's executor and friend. [2] A good pastel version at Townley Hall, near Drogheda, was also purchased in 1842 from the Marquis Malatesta. [3] Although Miss Stuart-Wortley connected this receipt with NPG 378 it could refer to either of the other versions.

Some losses in the face; the scarlets have faded; slight water stains up the right-hand edge.