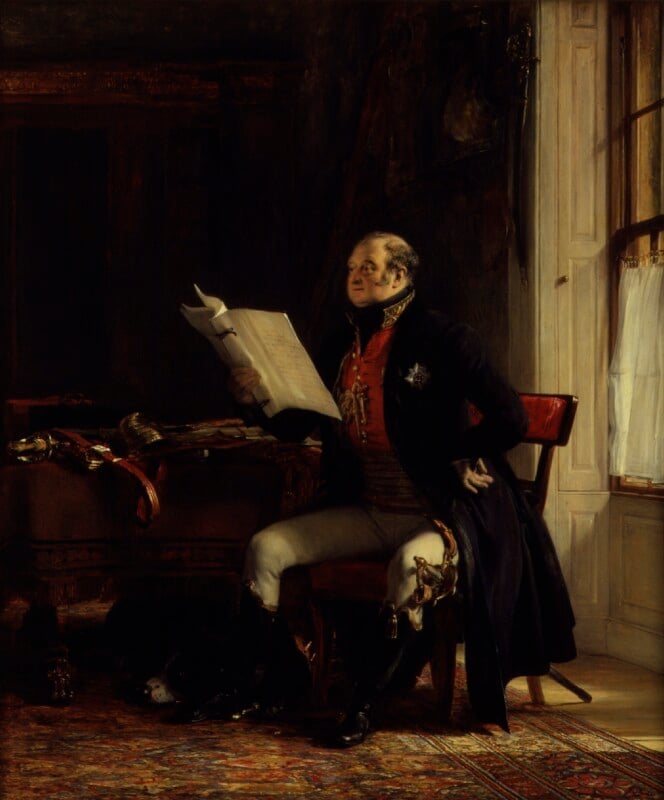 Signed and dated along the table-cloth fringe: David Wilkie 1823.

The portrait was commissioned by the Duke's military secretary, Sir Willoughby Gordon, in December 1818: 'to paint a portrait of HRH the Duke of York in small provided he could prevail on his Royal Highness to sit' (Allan Cunningham, Life of Sir David Wilkie, 1843, LI, p 14). The first sitting was noted in Wilkie's journal on 18 May 1822: 'The Duke of York came today to sit for Sir Willoughby Gordon's picture. I painted in the eyes, nose and forehead; found HRH a very fine subject for a picture' (ibid., II, p 72), and there were more sittings in June and July (MSS cited by Hamish Miles), Wilkie finishing it between his return from Edinburgh in September and the RA exhibition of 1823. Although the sittings took place in Wilkie's studio in Kensington the background and furniture were from the Commander-in-Chief's study in York House (not the Horse Guards: Allan Cunningham, Life of Sir David Wilkie, 1843, II, p 15). The paper is possibly the Horse Guards Memorandum of 25 April 1822 ordering a new type of sword for General Officers, both old and new types being distinguishable in the picture (Charles Ffoulkes in Journal of Society for Army Historical Research, XVIII, Spring 1939, pp 49-50). Several sketches in watercolour, chalk and ink were at the Maas Gallery in 1970, one signed and dated 1823 probably after completion; others are in the National Gallery of Scotland and The Binns (National Trust for Scotland). A copy by Robert Swan is in the Regimental HQ of the Grenadier Guards, Birdcage Walk.

Whole-length seated to left in brown top-coat with Garter Star over field marshal's uniform (1814-28), reading an army order, a sword lying on the table.

Commissioned by Sir Willoughby Gordon and by family descent to Lord Burgh at whose sale at Northcourt 7 February 1938 (182) it was bought by Leggatt for the NPG.