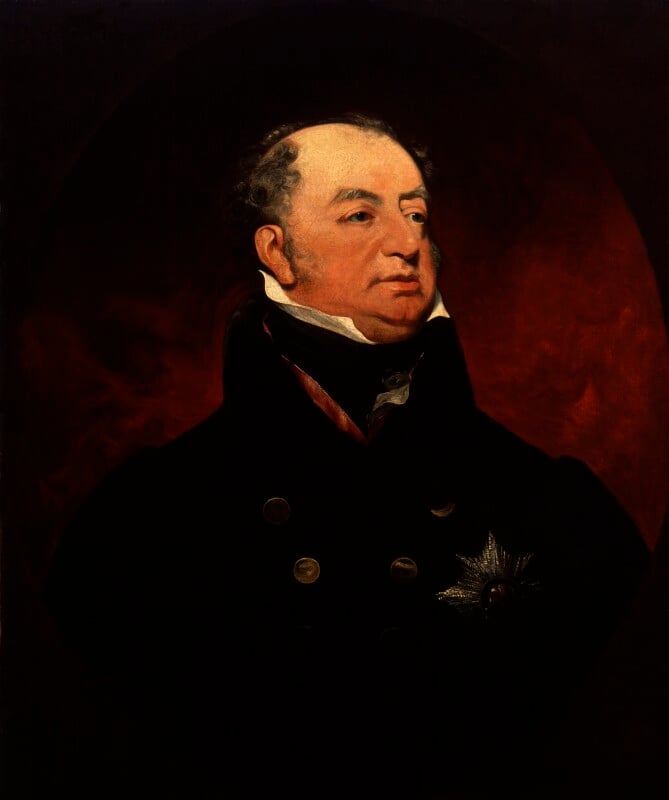 Jackson's original portrait, exhibited RA 1822 and engraved for Cadell's Contemporary Portraits belonged to the artist but has since disappeared, though it may never have existed as an oil; a pencil drawing (the head engraved) was with Colnaghi in 1970. The variant in dark coat and private dress, engraved in mezzotint by S. W. Reynolds, was probably the portrait in the collection of the Duke of Cambridge (one of his successors as C.-in-C.), in the sale of his effects at Christie's 11 June 1904 (60) and bought by Lord Armstrong for Bamburgh Castle where it still is. The NPG copy belonged to the noted collector and patron George Watson-Taylor. Another copy was acquired by HM Queen Mary for the Royal Collection c.1900 (Sir Oliver Millar, The Later Georgian Pictures in the Collection of Her Majesty The Queen, 1969, 863) and another, formerly in Schloss Pommersfelden, was with Spinks in 1921, attributed to Beechey, and with a Leipzig gallery in 1936, attributed to Lawrence; a variant copy by Haines was engraved by Thomson for La Belle Assembleée February 1827. An enamel copy by Charles Muss 1824 was at Sotheby's 24 February 1980 (94), another by W. Essex was exhibited RA 1826 (438), and another by J. T. Mitchell was exhibited SBA 1829 (588). A miniature copy by Joseph Lee is in the Wallace Collection (315) and another by J. C. D. Engleheart, signed and dated 1824, was at Sotheby's (Twiston Davies sale) 20 July 1981 (76). Jackson painted another type of portrait, known from a stipple vignette by R. Hicks published Fisher 1831, head and shoulders in uniform, Star of Garter and Badge of Bath, head turned to left. H. C. Morgan, Life and Works of John Jackson RA, 1956, p 113 categorically states that NPG 1615 is not by Jackson, but there was certainly a connection between Taylor and Jackson: an oil portrait of Sir Simon Richard Brisset Taylor (Mrs G. W. Taylor's brother) is still in the family collection, inscribed on the back: Sir Simon Taylor by J. Jackson R.A. 1815.

(Of the original)
Stipple by J. Wright 'from an Original Picture by J. Jackson RA in his own Possession', published 16 August 1822 for Cadell's Contemporary Portraits, I, 1822, p 4; in the engraving the head is the same but the body is half-length in uniform. A mezzotint by S. W. Reynolds and S. Cousins, following the original closely, was published by W. Sams, 1 June 1825 (Alfred Whitman, Samuel Cousins, 1904, 310).