1 of 7 portraits of Edward Armitage 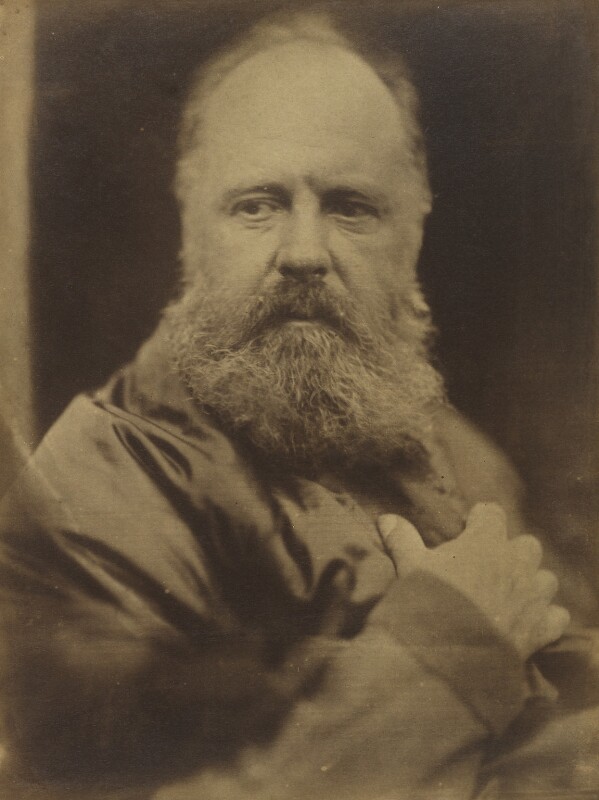 This is one of the sequence of portraits of artists wearing historical and contemporary costumes in similar poses taken by David Wilkie Wynfield in the early 1860s, many of which were issued anonymously in 1864 as a partwork, The Studio: A Collection of Photographic Portraits of Living Artists, taken in the style of the Old Masters, by an Amateur. There are thirty-two examples in the National Portrait Gallery’s collection; this image was acquired from a different source than the others. For more on both project and technique, see NPG collection P70–P100.

Suggestive of a Jacobean statesman or Venetian senator, the costume worn by Armitage appears to allude to his seniority, as does his sober demeanour; although only in his mid-40s and not yet elected an Academician, he was older than most of Wynfield’s sitters.[1] The hairline of the sitter seen here more or less corresponds with an Elliott & Fry carte-de-visite taken when Armitage was around 50 (see ‘All known portraits, Photographs, c.1867’) and while the exact date is not known, there is little doubt that it was taken in the same period as those issued by Wynfield in 1864. The image is discussed by Juliet Hacking in relation to ‘the older generation’ of Wynfield’s contemporaries, including Richard Ansdell (NPG P70), John Phillip and Alfred Elmore.[2]

In keeping with Wynfield’s practice, the sitter is placed against a dark background that contrasts with his pale domed head and the reflected lights of the costume. Whilst the hand directs the eye to the face, the oblique gaze lends a depth of interest to the image.

This is the only known print of the photograph.

1) According to the ILN (9 March 1867, pp.238–9), commenting on his belated election as ARA, Armitage had publicly criticized the teaching methods of the RA Schools, and ‘his avowed opinions may have retarded his election’.
2) Hacking 2000, p.48. Armitage is not included in this exhibition catalogue.