1 of 25 portraits matching these criteria: 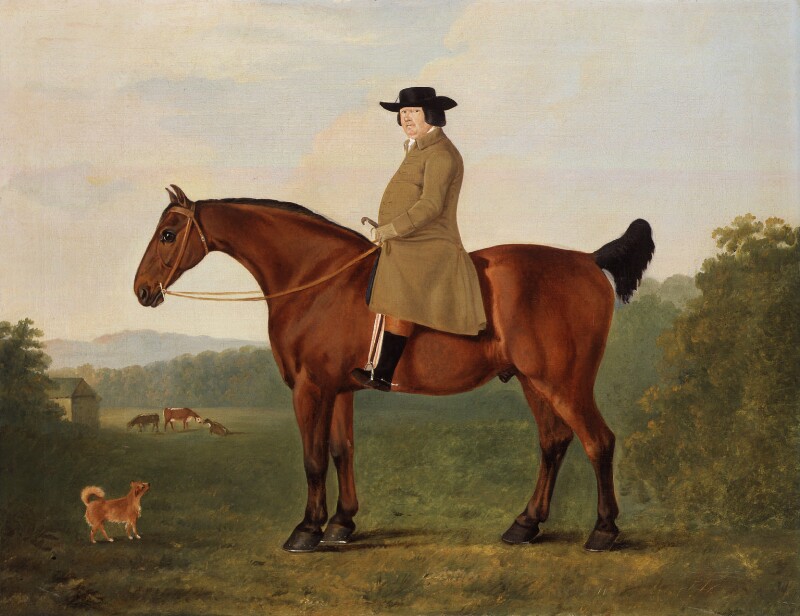 One of four similar portraits of Bakewell, the other three lacking the foreground dog. In the signed portrait in the Leicester Museum and Art Gallery (bought in 1967) Bakewell wears a green coat; it is probably the prime version. [1] The other two, at the Brooksby Agricultural College, Melton Mowbray, [2] and with the Royal Agricultural Society, appear to be copies; neither head, for example, has the quality of the Leicester or NPG versions, one of which must have provided the original from which F. Engleheart engraved the half-length portrait of Bakewell in 1842. [3]
The attribution to Boultbee is traditional. A Leicestershire painter, he was living at Loughborough at least in 1787-88; in 1788 he exhibited ‘a favourite horse of Mr Bakewell’ at the RA, and in 1791 another Bakewell horse by Boultbee was engraved by F. Jukes. [4]

Blue eyes, wearing a black hat, buff coat and black boots, mounted on a bay hunter, his prize cattle beyond.

1 The sitter’s friend and a fellow stock-breeder. The provenance cited is that given in the Sotheby sale cat. of 1987.