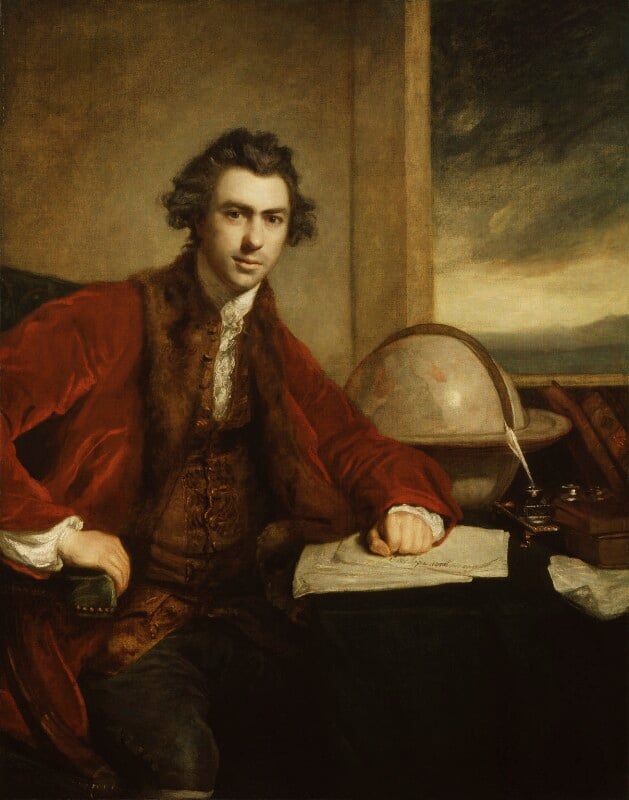 When this portrait was painted Banks was enjoying considerable acclaim for his part in Cook’s Pacific voyage in the Endeavour in 1768-71. Boswell had met ‘the famous Mr Banks’ in March 1772, ‘a genteel young man, very black, and of an agreeable countenance, easy and communicative, without any affectation’, [1] and Reynolds was already familiar with his remarkable botanical and ethnographical collections. In 1772 Banks was invited to accompany Cook’s second Pacific voyage (perhaps the first reason for the inclusion of the Horace quotation, cras ingens iterabimus aequor), [2] but in May he withdrew, following his impractical demands for space on board. [3]
Banks’s name appears in Reynolds’s sitter book in November and December 1771, and in January, February and March 1772; between July and December 1772 he was travelling in the Hebrides, Iceland and the Orkneys, but he met Reynolds immediately on his return and the last sitting took place in March 1773. A payment of 70gns. was made to Reynolds by a Mr Hodgkinson [4] on 15 January 1774. The portrait has long been admired, for its intellectualism, power and energy, [5] but above all for its characterisation: 'no painter could have so expressed the hungry heart of a man smitten with the passion of exploring and inquiring, unless he had felt a deep and intelligent sympathy with his sitter'. [6]
A small bust-length oval version, in which the fur-collared coat is blue, was painted by Daniel Chodoweicki c.1780 (with a pendant of Dr Solander; both in the Gemäldegalerie, Berlin; 491A & B).

By descent from Dorothea, Lady Banks, through her nephew, Sir Edward Knatchbull, 8th Bt, to Sir Wyndham Knatchbull, 12th Bt (d. 1917); his heir, the 4th Baron Brabourne, from whom bought 1918 by the 1st Viscount Cowdray; his son, Clive Pearson, Parham Park;1 by descent to Clive Gibson, from whom purchased by private treaty sale through Agnew 1986, with the aid of the National Heritage Memorial Fund, the National Art Collections Fund and The Pilgrim Trust.