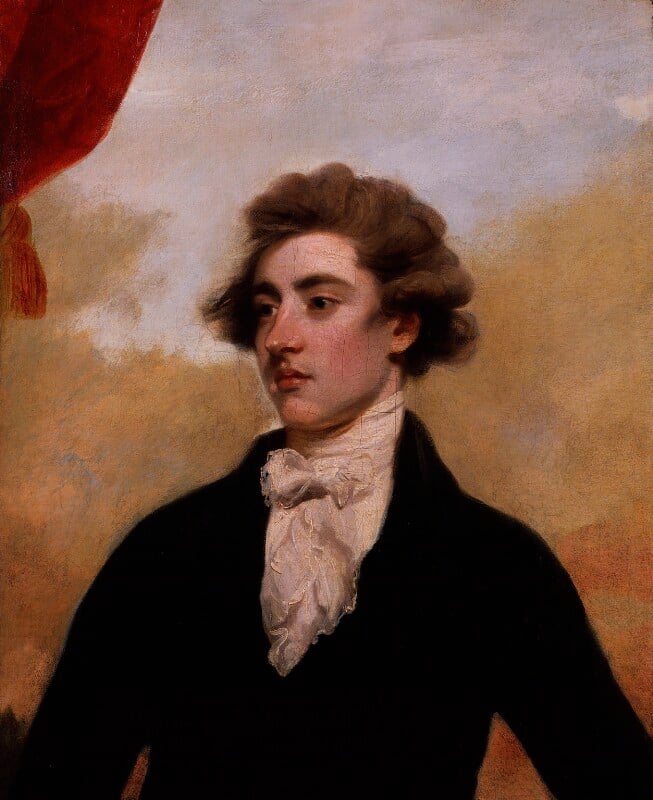 Beckford was sitting to Reynolds in February and March 1782. He had attained his majority and succeeded to his vast wealth the previous September and he was to go to Italy for a second time in May, while the portrait was being exhibited at the Royal Academy. A contemporary review then found ‘nothing remarkable’ about it. [1] Beckford did not pay Reynolds the 50 gn. for his picture until 10 February 1785, [2] by which time scandal was changing his life dramatically; fifty years later he could describe the picture as ‘a distinguished work of Sir Joshua’s, painted in one of his happiest moments - moments I should never forget were I to live a thousand years’. [3] It was also in 1835 that Dean’s engraving of NPG 5340 was published showing a uniformly dark background, oddly appropriate for the outcast in Lansdowne House, but probably indicating that the sky was already overlaid with the ‘luminous ... golden brown’ otherwise first described in 1883, [4] which was not removed until 1981.
The background of NPG 5340 now seems to resemble a hot evening sky, curiously at odds with Beckford’s dark coat; Mannings observes that such a background ‘is most unusual’ in Reynolds’s work.

Grey eyes, light brown hair, wearing a black coat with white lace cravat; a bright red curtain top left, the background passing from a bright blue at the top, through warm umber to a hot orange.

1 On Beckford’s death the portrait was listed among his possessions as showing him ‘when about eighteen years of age’ (Boyd Alexander, 'Portraits of William Beckford', Register of the museum of Art, University of Kansas, 1967, pp 9, 13n30).