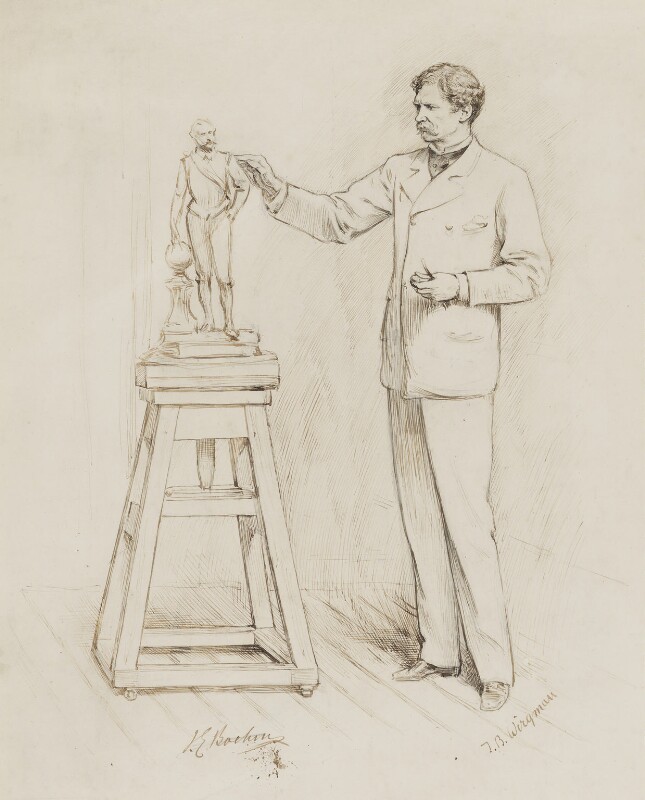 Theodore Blake Wirgman, graphic artist and printmaker, was born into a Swedish family in Louvain, Belgium, and studied at the RA Schools, London, and then with Ernest Hébert in Paris.[1] On returning to England he worked for the Graphic (1875–1901) and it is possible this careful drawing was preparatory to a magazine illustration.

Boehm is shown working on a maquette for the statue of Sir Francis Drake, a bronze commissioned by the Duke of Bedford for Tavistock, Devon, in March 1882.[2] The drawing is undated but Boehm was enthusiastic and began work on the Drake commission in April.[3] There are differences between the model in Wirgman’s drawing and the finished statue as cast in 1883 (e.g. Drake’s costume, the socle for the globe); Wirgman probably shows an early discarded design which indicates a terminus ante quem of 1882. Boehm seems to be modelling in clay; it was his use of terracotta, a relatively unusual medium among British-trained sculptors at the time, which attracted attention when he began exhibiting in 1862.[4]

Wirgman exhibition, a show of drawings from scrapbooks, Abbott & Holder, London, 1977 (no handlist).