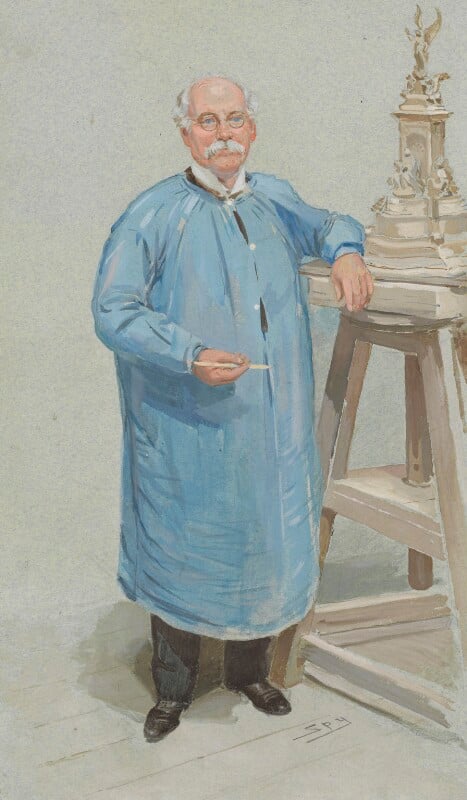 This finished drawing was preparatory to a lithograph that was published in Vanity Fair on 21 September 1905 and titled ‘The Queen’s Memorial’. As the magazine’s ‘Man of the Day’ Brock is shown with a model of the monument he designed for the top of the Mall, a commission that earned him a knighthood after its unveiling in 1911. The drawing is very close to the print. [1] It is hardly a caricature and is best read in conjunction with the editor’s biographical sketch:

Mr Thomas Brock is a bluff, business-like Englishman who has learnt his art in the land that now honours him as a sculptor. He is a man who loves his home, practises the simple life, works hard, dresses like a mere inartistic individual, and has a conscientious objection to posturing before the public. [2]

Leslie Ward ('Spy') was the successor to Carlo Pellegrini (‘Ape’) on Vanity Fair. The magazine published large, folio-size chromolithographic portraits on a weekly basis; Pellegrini established the formula in 1869. ‘Ward was the first English artist to develop the portrait chargé, but in a much gentler style than his predecessor.’[3]

There is no reference to Brock or his sitting in Ward’s autobiography, Forty Years of ‘Spy’ (1915).

Whole-length, standing slightly to right, wearing spectacles, a smock, and holding a clay modelling tool in his right hand, with model for Queen Victoria Memorial.