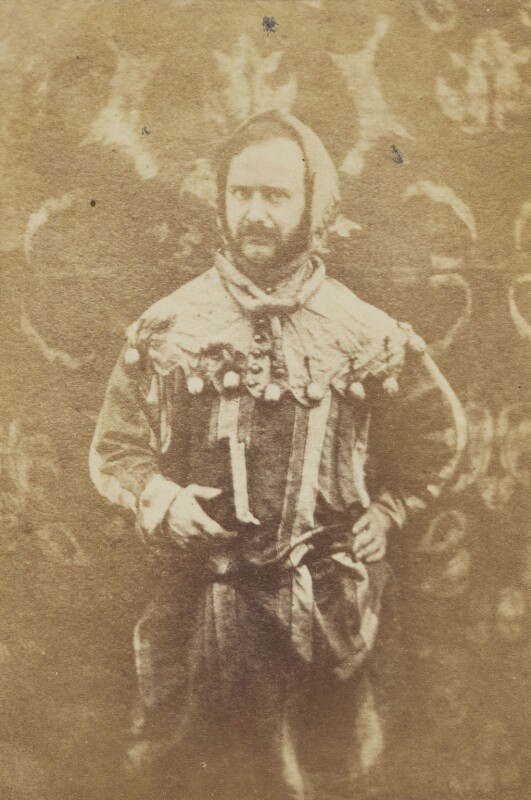 Inscr. in pencil on mount: ‘William Burges, architect / over’.
Inscr. on reverse: ‘There is a poor fellow / called Burges / Who from babyhood / hardly emerges. / If you were not told he’s / disgracefully old / You’d offer bull’s eyes to / Burges. / D.G. Rossetti.’

‘I was brought up in the 13th century belief, and in that belief I intend to die,’ Burges declared rather defiantly in 1876.[1] He found inspiration in illuminated manuscripts and especially admired the thirteenth-century drawings of Wilars de Honecourt.[2] The costume he wears in this photograph – an outfit he himself designed – is an eclectic mixture of medieval motifs and, seen against the Renaissance backdrop, a typical example of his romantic, historicizing approach to life.[3]

His short-sightedness and burly figure made him the butt of many affectionate jokes. William Michael Rossetti remembered ‘Billy’ Burges as a plump and ‘excessively short-sighted’ schoolboy;[4] later Edmund Gosse described his work as ‘more jewel like than architecture, just because he was so blind.’[5] Burne-Jones drew him asleep in bed with his spectacles on (see ‘All known portraits, By other artists, c.1881’). Burges seems to have been sensitive about his appearance and avoided the issue of portraiture, and the number of known images of him is small. Here, in fancy dress and without his usual spectacles, his identification rests on the evidence of the costume and the inscription on the mount.[6]

Three-quarter-length, head slightly to left, wearing a jester’s costume and holding a book in his right hand.