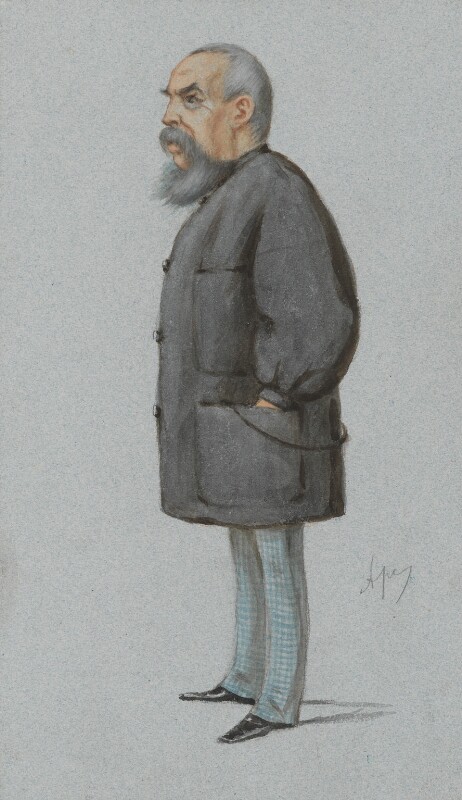 The first mention of Carlo Pellegrini in Isabel Burton’s biography of her husband is in December 1875, when the Burtons were staying at a hotel in Folkestone prior to embarking for Boulogne: ‘.... and there Carlo Pellegrini joined us. He was staying there for his health, and painting a little.’[1] Ten years later, when the Burtons were spending the summer in London, Isabel recorded that ‘Carlo Pellegrini came several times to lunch with us, in reality wishing to caricature Richard in Vanity Fair, which he did – but it was one of his few great failures.’[2] This was shortly before the publication of the first volume of Burton’s unexpurgated translation of The Thousand and One Nights on 12 September, followed a few weeks later by the appearance of Pellegrini’s caricature on 24 October.[3] The published lithograph by Vincent Brooks, Day & Son is sub-titled ‘The Arabian Nights’.

Burton was now in his mid-sixties and his much-vaunted physical strength and agility were waning. Pellegrini depicts him as bull-necked and bushy-browed, with grizzled hair and beard. He wears a short, heavy coat like a pea-jacket, from the deep patch pocket of which coils something that resembles a whip.

The accompanying text is markedly free of satirical commentary. Giving a packed account of Burton’s life and travels, it concludes:

As a bold, astute traveller, courting danger, despising hardship and compelling Fortune, Captain Burton has few equals; as a master of Oriental language, manners, customs, he has none. He is still very young, very vigorous, very full of anecdotes and playful humour and what is remarkable in a linguist, he has not disdained even his own mother tongue, which he handles with a power and precision that few can approach. He has recently crowned his labours by the most complete, laborious, uncompromising and perfect translation of that collection of stories known to us as ‘The Arabian Nights’ ... He is a wonderful man.[4]

Whole-length, profile to left, standing with hands in overcoat pockets.