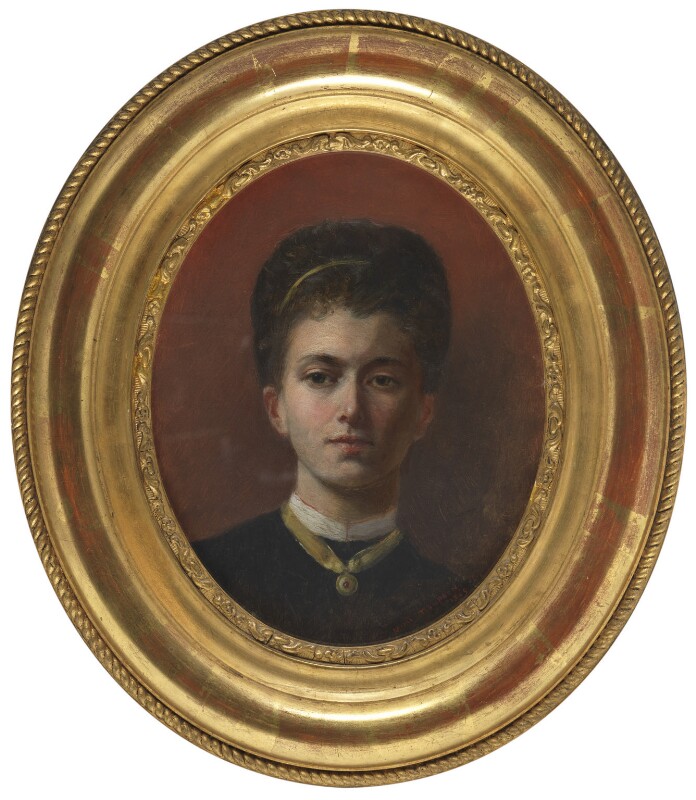 Much of Butler’s childhood was spent in Italy. Her father, Thomas James Thompson (1812–81), after unsuccessfully trying for Parliament, took his family abroad and ‘devoted his leisure’ to the education of his daughters Elizabeth and Alice (later Alice Meynell). [1] There were numerous English ‘colonies’ dotted along the Mediterranean, and the Thompsons settled near Genoa for periods during their extended travels, c.1847–61. In October 1868 the family set out for a further long visit to Italy. The winter was spent back at their former palazzo near Genoa: ‘That was a very greatly enjoyed autumn, winter and spring’, wrote Butler, ‘and the gaieties of the English Colony, the private theatricals, the concerts at Villa Novello – all those things did me good.’ [2] April to October 1869 were spent in Florence where Butler attended the studio of the academic painter Giuseppe Bellucci (1827–82). The Thompsons then moved to Rome for seven months before returning to London in the summer of 1870.

NPG 5314 is a small, serious image, carefully painted and conveying self-possession. It was certainly painted in Italy where Butler set up ‘little studios’ as the Thompson family moved from Genoa to Florence and Rome; it may have been painted in Genoa – where she apparently ‘went in for life-size heads’ – and it seems to have been framed in Florence. [3] It is signed with Butler’s pet name, Mimi, and dated 1869. The original framing incorporated a fragment of a ‘Calendario Fiorentino’ for 1868 (a calendar of saints’ days), superinscribed with details of the portrait: ‘Mimi Thomson. / painted by herself / (afterwards Lady Butler* / & presented by her to our Aunt / Miss Sabilla Novello / Valeria Gigliucci / / * Famosa pittrice Inglese – autrice di quadri / a soggretto militare.’ [4] (Mary) Sabilla Novello (1821–1904), the sixth daughter of Vincent Novello, was a singer and singing teacher in London. [5] At some date after 1856 she and her brother, the music publisher (Joseph) Alfred Novello, left London to settle in Genoa; [6] Butler’s reference to the concerts at the Villa Novello presumably refers to that establishment.

Sabilla Novello, who did not marry, left Butler’s self-portrait to her Gigliucci niece in Florence, via whose daughter – who was also the granddaughter of Alice Meynell – it came to the NPG in 1980.

1) ‘My father, cultured, good, patient, after he left Cambridge and after his unsuccessful attempt to enter Parliament devoted his leisure to my and my younger sister’s education [...] nor did his tuition really cease till, entering on matrimony we left the paternal roof.’ Butler 1923, p.1.
2) Butler 1923, p.54.
3) Butler 1923, p.54. There was also a Novello connexion in Florence. In 1843 the music publisher Vincent Novello’s daughter Clara Novello (1818–1908), a celebrated singer, had married the Florentine Count Gigliucci.
4) Misreading of the inscription has given rise to an NPG cataloguing error (perpetuated in Usherwood & Spencer-Smith 1987, cat.11, where two names are read as one: ‘Miss Dalilla [sic] Novello / Valeria Gigliucci’). In fact the inscription refers to Sabilla Novello (Groves 1954, vol.6, p.136) and, separately, to Sabilla’s niece, Valeria Gigliucci, the daughter of Clara Novello (see note 3 above).
5) See The Novello Family by E.P. Novello; {NPG 5686}.
6) Groves 1954, vol.6, p.136. Clara Novello’s Reminiscences (Gigliucci 1910) make no reference to the Thompsons.