11 of 92 portraits matching these criteria: 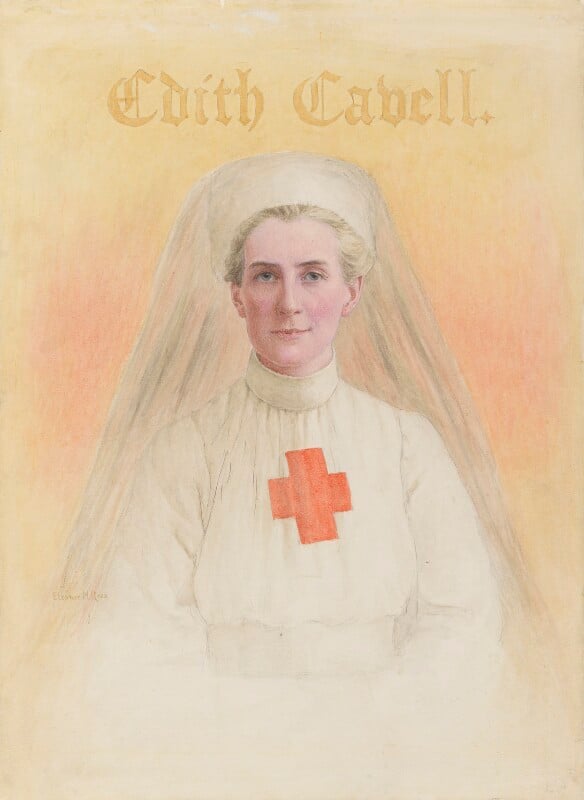 This work was undertaken by Eleanor M. Ross, a Member of the Society of Miniaturists, London, who is best known for this portrait of Edith Cavell. It was once owned by Queen Alexandra, the wife of Edward VII, and was exhibited at the Royal Academy Summer Exhibition in 1917. Ross completed this portrait after the death of the sitter and presented Cavell in an ideal way, with a nun-like veil and as a modern-day saint. [1]
Cavell was matron of a Red Cross Hospital in Brussels in World War I. She became renowned for treating all of her patients equally, regardless of their nationality, and worked and taught on the principle that where a life could be saved, it ought to be saved. Cavell was executed by the Germans for smuggling allied troops separated from their regiments out of Belgium. The actions of the German authorities could be justified according to the laws of war but the circumstances surrounding her death, particularly the speed with which the sentence was carried out, caused public outcry. The death of the nurse became a major propaganda disaster for Germany. Edith became an icon because of her sex, nursing profession and apparently brave approach to death. She was a national heroine, whose case came to play an important part in British propaganda. The Allies acclaimed her as a martyr and those responsible for her execution as murderers, with Britain skilfully using her image and death to encourage men to enlist in the army. At the time when there was no conscription but within eight weeks recruitment into the British Army had doubled. Her execution was even used to sway neutral opinion against Germany and eventually saw the USA enter the war. It is ironic that the allies and artist’s such as Ross presented her in this way though, because it was completely at odds with her own last wishes. According to her biographer, Diana Souhami, Cavell was self-contained and, by nature, obedient and law abiding, but also deeply Christian and saintly. [2] Souhami says: “[s]he was a martyr ... If she isn’t a saint, who is?” [3], but Cavell herself wished to be remembered simply as a nurse who tried to do her duty [4]. The strength of feeling surrounding her execution, undertaken whilst she was blindfolded and tied to a stake, is demonstrated by the comparison that modern commentators have drawn between her death and a type of crucifixion. [5]
One of the last people to see Miss Cavell alive was Mons. G. Hostelet, a Belgian doctor of science implicated at the same time as her. His account of these last moments with Cavell was published in the March, 1919 edition of the “Nineteenth Century and After” periodical and gives an insight into perceptions of her nature and approach to her death. An extract follows here: “The military prosecutor came in. With his high colouring, waxed moustaches, elegant and brisk, he looked cheerful as ever. He entered the reserved part of the hall, followed by the interpreter, the lieutenant, the prison commandment and the German chaplain. He took a large sheet of paper from the portfolio carried by his faithful attendant. Everyone was silent, and instinctively drew together. The prosecutor read the verdict in German as if he were reading a list of honours. Five times the sinister 'Todesstrafe' (death penalty) was heard. For Baucq, Miss Cavell, Séverin, Mlle. Thuliez, and Comtesse de Belleville. I got off with five years. Madame C. was acquitted. She fainted. The melodramatic but generous coal-miner was acquitted. He wept. The grey-beard was acquitted. He never budged. The suicide was acquitted ... The interpreter signed to us to leave the room ... I saw Miss Cavell leaning against the wall, cold and impassive. I went to her and said a few words of hope. ‘Mademoiselle, make an appeal for mercy’, ‘It is useless,’ she answered placidly; ‘I am English, and they want my life.’ At that moment the sub-commandant of the prison came for her. After dawn I could not sleep. A door opened, and steps died away in the distance. Another door opened, and the same vague sounds followed. I listened anxiously with the fear that our door would open in its turn. I watched Séverin, sleeping heavily on his bed ... Happily everything became quiet again. Only the sound of the sentry’s boots, tramping up and down, disturbed the silence like a ticking clock ... The military chaplain visited us at breakfast-time and told us that Miss Cavell and Baucq had met their death heroically.” [6]