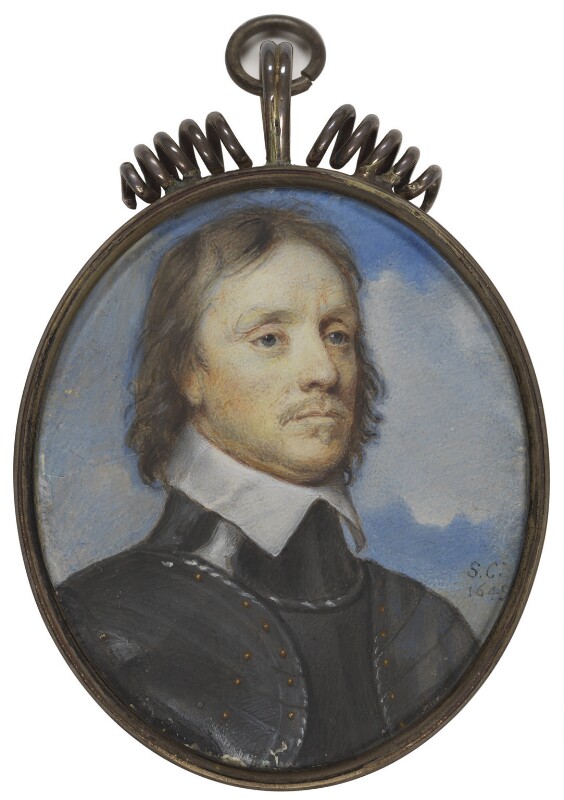 Signed and dated above his left shoulder S.C./1649.

A powerful, accomplished image, one of the earliest of Cromwell and certainly the earliest known of him by Cooper. [1] It shows a head looking younger and less stressed than those by Walker and by Cooper from the 1650s, and remains perhaps the most attractive of all his portraits.
NPG 5589 had previously been at Northwick where called Robert Lilburne, but it was correctly identified by the time of the Sotheby’s sale. [2]
A copy in oil is in the Hermitage State Museum. [3]

1) Cooper had ‘some worke for my Lo: General Cromwell and his family to finish’ in 1650 (Long 1929, 85; K. Coombs, The Portrait Miniature in England, 1998, p 65), previously accepted as the earliest reference to their association.
2) Oliver Millar had recognised it at Northwick in 1958, but his identification was not accepted, it would appear, by Piper. In the Northwick Catalogues of 1864 and 1908 unattributed miniatures are listed as of ‘Robert Lilburne’ and of Cromwell, nos.12 and 15.
3) Panel, 39 x 31, the composition extended, showing his right arm resting on a stone ledge, a baton in his hand.