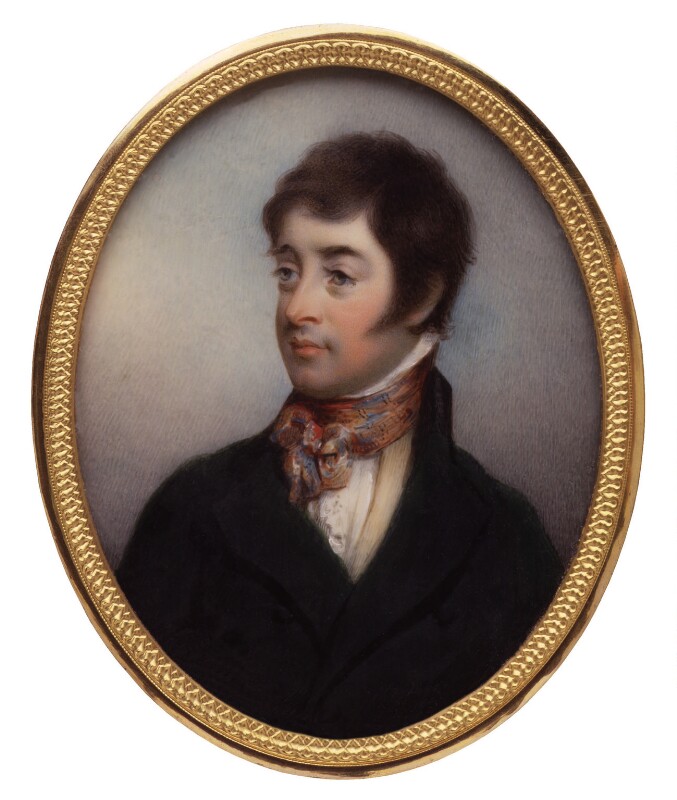 The miniature seems to derive from Hamilton's oil in the National Gallery of Ireland and of which NPG 3815 is a variant. However according to Huffam's mezzotint Horace Hone's original portrait was painted in 1796; an early version, if not the original, is still in the Fitzgerald family collection, signed and dated 1797 but with the eyes looking downwards. Hamilton's portraits, possibly also begun in 1796-7, were not actually finished until after Fitzgerald's death in June 1798. A letter from Fitzgerald's aunt to his brother Henry makes this clear: 'There are two pictures of him, one for your mother and the other for you ... Mr Hamilton says they are not finished and cannot be ready to go to England these three months ...' (Thomas Moore, Life and Death of Lord Edward Fitzgerald, 1831, II, p 149). It seems unlikely that either Hamilton or Hone would have had any opportunity for sittings in the hectic days of 1798. It is more probable that both artists would have painted him in Dublin at the time of joining the United Irishmen in 1796. Hone, at this time registered in the RA catalogues as 'a miniature painter to HRH the Prince of Wales', may even conceivably have had a sitting in London, Fitzgerald en route for Hamburg. The lettering on Huffam's mezzotint certainly implies an original portrait: 'From a Miniature by Horace Hone copied from a portrait painted by him in 1796'. Therefore although Hone's miniatures of Fitzgerald have usually been considered to have been derivations from Hamilton's oils, perhaps because of a similarity in the pose, they may well have been produced independently and even possibly to have been the origin of the Hamilton portraits.
Several versions of Hone's miniatures are known (1) in the Fitzgerald family collection, signed and dated: H. Hone ARA/Pinxt 1797 and originally belonging to Lord Edward's niece, Lady Jane Repton; (2) in National Gallery of Ireland (2156) signed and dated HH 1797; (3) offered to the NPG in 1934 and withdrawn; (4) at Christie's 18 December 1973 (7); (5) NPG 5704; (6) watercolour sketch on card in the Duke of Leinster's collection, signed and dated: HHone delt 1798; (7) variant in crimson on black military cloak, signed and dated 1806 and originally belonging to Lord Henry Fitzgerald, was at Sotheby's (Lady de Ros sale) 25 June 1979 (84).
The 19th century attributions to Nathaniel Hone and Thomas Hargreaves can be discounted; Hone died in 1784 and, though it is hard to discard the family tradition naming Hargreaves, he is unacceptable on stylistic grounds.

Probably his mother's sister, Lady Sarah Napier, whose grandson John owned it in 1865; probably then to John's sister Marianna who had married the 4th Earl of Arran in 1838; by descent to the 6th Earl of Arran and his Will Trust sale, Christie's 13 December 1983 (173), bought Leggatt for the NPG.