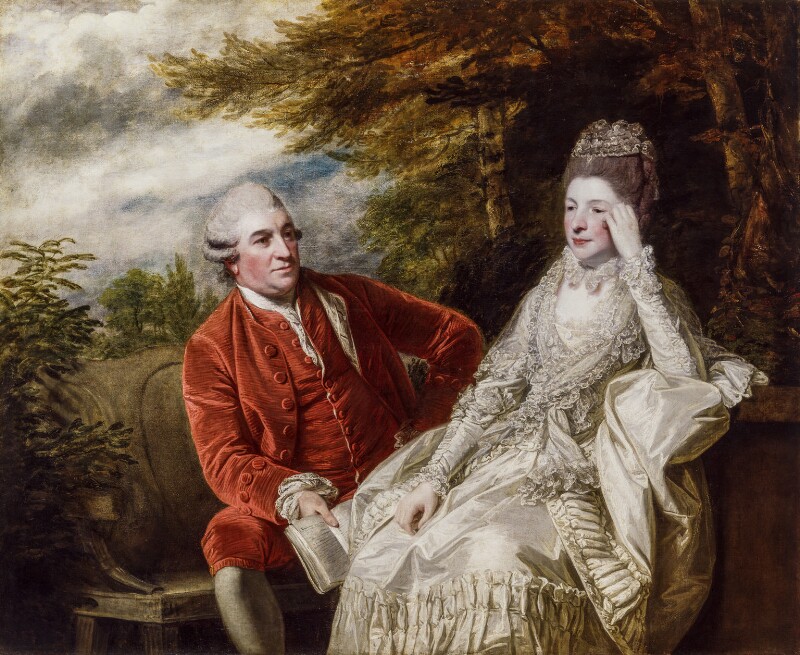 Garrick appears to have just finished reading to his wife who reflects upon his words; the setting has been described, inevitably, as the Garricks’ villa at Hampton. [1] On 19 November 1772 James Northcote told his brother that Reynolds was ‘painting Mr and Mrs Garrick in one picture’. [2] Reynolds’s pocket books record appointments for David Garrick in 1772 on 29 October and 3, 5 and 6 November; and for his wife on 16, 20, 27 and 29 October and 4 November. In 1773 Mrs Garrick sat on 17 April. Ribeiro has observed that Garrick’s velvet suit was rather old-fashioned by this time; the style (the three garments made of the same fabric) was one favoured in his youth; by contrast Mrs Garrick, who has artificially whitened skin and rouged cheeks, wears the newly fashionable long-sleeved gown. [3]
The figure of Garrick alone was copied on a kit-cat canvas once owned by Sir James Mackintosh, [4] etched by W. Boucher in 1894 as from a painting by Gainsborough [sic] belonging to Mrs Kaye. A reduced copy of NPG 5375 was sold Christie’s, 30 July 1981, lot 256.

Garrick has brown eyes, a grey powdered wig, and wears a red corded velvet suit, the coat and waistcoat with a white lining. Mrs Garrick has blue-grey eyes, and is dressed in white satin.