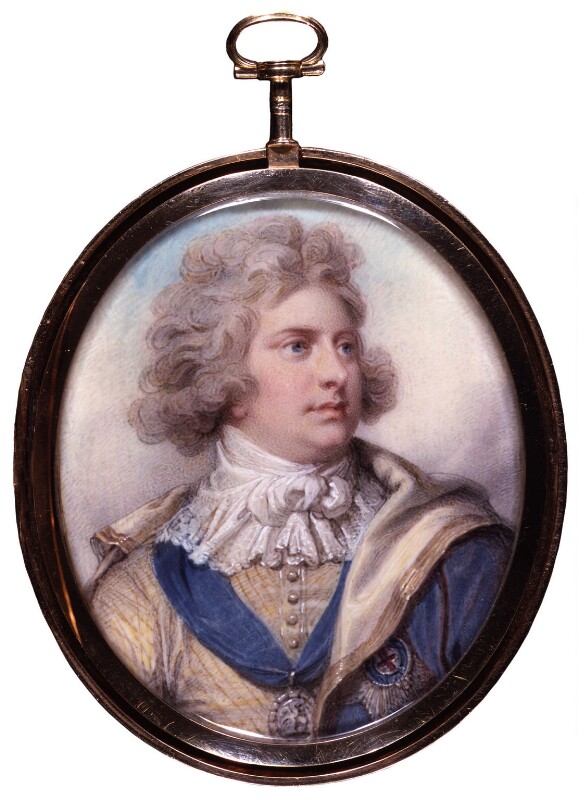 Cosway's association with the Prince of Wales began through their mutual friendship with Mrs Fitzherbert in 1785. In the RA Catalogue for 1785 he first styles himself 'Principal Painter to his Royal Highness the Prince of Wales', a year or so later to be exalted into the grandiose Latin translation to be found on many of his miniatures, including NPG 5389.
The original of the NPG portrait appeared when Cosway was working for the Prince at Canton House and shows the sitter as 'Prince Florizel', whole-length to the left in the Garter insignia and flamboyant Cavalier fancy dress with the elegant flat collar popular in the 1620s. It was engraved by Louis Sailliar, published 24 August 1787 and exhibited SKM 1865 (1279) lent by the Hon William Ashley. Numerous head and shoulders versions are known, Sharp's engraving of 1790 showing the head to right. NPG 5389 stems from this point but is unique in the neckcloth, falling lace collar and knotted cravat.
Cosway enjoyed the intimate friendship of the Prince of Wales for many years until he fell from favour when the Prince officially became Regent in 1811. He painted many portraits of his patron, the Accounts in the Royal Archives listing over thirty. One now in the Walters Art Gallery, Baltimore, became widely popular through Condé's large stipple engraving published 1 December 1794, occasionally pirated by other artists. A copy attributed to Richard Collins was at Sotheby's 15 November 1982 (110).

(Of the original with flat collar)
Line engraving by William Sharp, in an oakleaf frame decorated with sunburst, Prince of Wales plumes and motto ICH DIEN, published 12 August 1790. Stipple engraving by T. Burke published 5 March '79' in Bell's Poets, 1791, I, frontispiece.