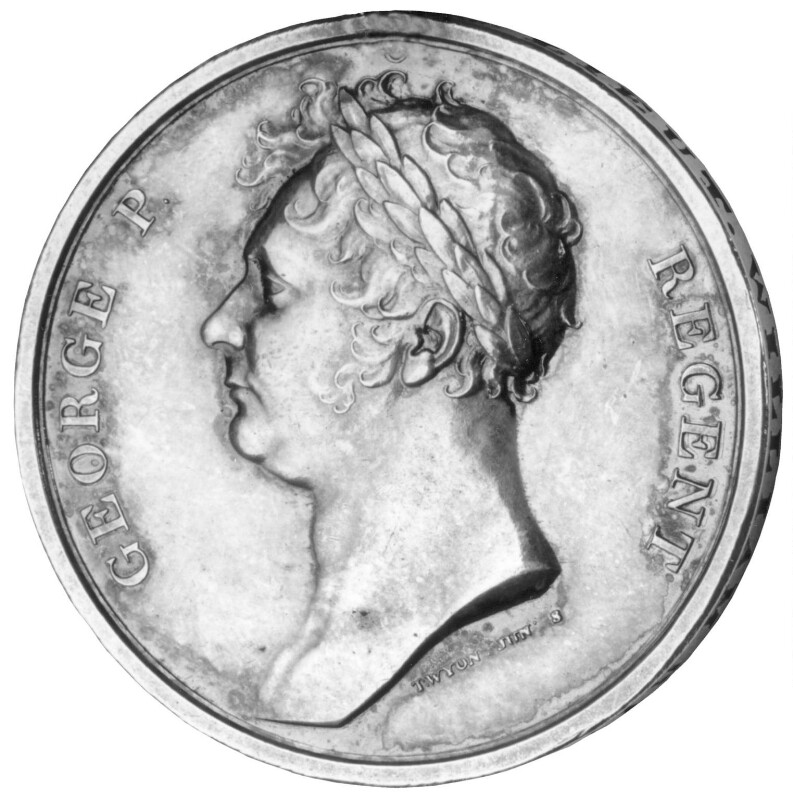 The medal was first proposed by Wellington in a despatch to the Duke of York, 28 June 1815, limiting the award to rank and file only: '... I would likewise beg leave to suggest to your Royal Highness the expediency of giving to the non-commissioned officers and soldiers engaged in the battle of Waterloo, a Medal. I am convinced that it would have the best effect in the army; and if the battle should settle our concerns, they will well deserve it' (Gurwood, Wellington Despatches, 1838, XII, p 520). Three months later he proposed to Lord Bathurst, Secretary for War, that it should be awarded to all who had served at Waterloo (ibid., p 636). The award was approved by the Commander-in-Chief on behalf of the Prince Regent, 10 March 1816, 'that in commemoration of the brilliant and decisive victory of Waterloo, a medal should be conferred on every officer, non-commissioned officer, and soldier of the British Army, present upon that memorable occasion ...' (London Gazette, 23 April 1816). Wyon was thereupon commissioned by the Royal Mint and is believed to have used as a model Lawrence's oil sketch, NPG 123.
The original Waterloo Medals to be minted show the Prince Regent's head, shoulders and chest, the right shoulder with toga. A specimen in the Royal Collection has an edge inscription: FIELD MARSHAL THE DUKE OF WELLINGTON K.G. & G.C.B. (Laurence Brown, British Historical Medals, 1980, 880). The first NPG specimen (head and neck only) has an edge inscription courteously addressed to Lady Mornington, mother of both the Master of the Mint and the Duke of Wellington. It was one of a number of presentation specimens mentioned in a minute of 3 June 1816: 'The Master of the Mint has directed Waterloo Medals to be struck in Fine Silver, and to be presented as a Gift by him to the persons undermentioned.' Then follows a list including the Prime Minister, the Commander-in-Chief, a group of Cabinet Ministers, Board Officers of the Mint and several others (MS in Royal Mint kindly communicated to me by the Librarian and Curator, G. P. Dyer). Unfortunately Lady Mornington's name does not appear in the list although there are signs of later additions.
The finally approved medal also shows the head and neck only and was issued to all who had served at Ligny (16 June), Quatre Bras (16 June) and Waterloo (18 June). It was worn on a red ribbon with blue borders, usually on the left breast but sometimes on a longer ribbon round the neck. The ribbon ring was occasionally altered to suit individual tastes.
The recipient of the medal NPG 5579, William Ripley, fought at Waterloo as a lieutenant in the 1st Battalion of the Oxfordshire Light Infantry Regiment, the 52nd. He was one of the Shropshire Ripleys, of Bedstone House, Bucknell, his medal descending by family inheritance to the 5th Baron Kenyon and his twin sister the Hon Mrs Desmond Cooke, who presented it to the NPG in 1983. The length of the ribbon suggests that it may have been worn round the neck rather than on the left breast as usual.

Ripley and Kenyon family possession and given by Lord Kenyon (Chairman of Trustees) and his twin sister, the Hon Mrs Desmond Cooke, in May 1983.