3 of 318 portraits by Robert Dighton 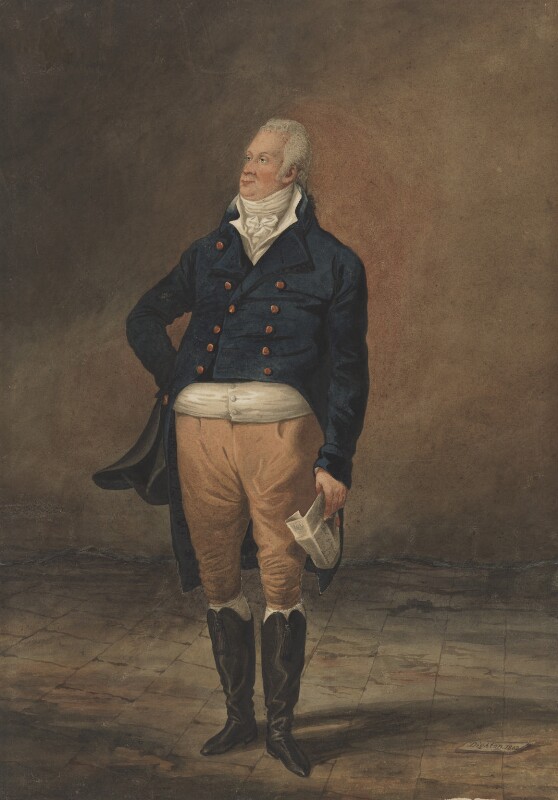 Signed and dated on a label lower right: Dighton 1803.

The previous owner, Mollie Hardwick an historical novelist, had typewritten a paper stuck to the back: 'Abraham Goldsmid was a member of the great Jewish 'Cousinhood', a prominent financier largely engaged on government business, owner of Morden Hall where he was a neighbour of Nelson and the Hamiltons. After Nelson's death, when Emma was in financial trouble, he bought Merton Place from her, but killed himself there as a result of the failure of the government loan in 1810. The portrait was obviously painted at Morden’ (paper in NPG archive).
Dighton's son, Richard Dighton, published in 1824 a companion etching of his nephew Sir Isaac Lyon Goldsmid, philanthropist and the first Jewish baronet (Alfred Rubens, Anglo-Jewish Portraits, 1935, 122, reproduced p 42). The NPG impression is identified as Mr B. A. Goldschmidt (Dighton's Caricatures, II, p 17).

Whole-length standing on boards to left holding a paper with red seal inscribed in his own hand: Abrm Goldsmid/Esq/London, in a blue morning coat with brass buttons, white waistcoat, white neckcloth and cravat, buckskin breeches, black top-boots. On the back in water-colour is a pair of elegant legs in shoes, stockings and breeches.

Mrs Mollie Hardwick and bought from her 1982.