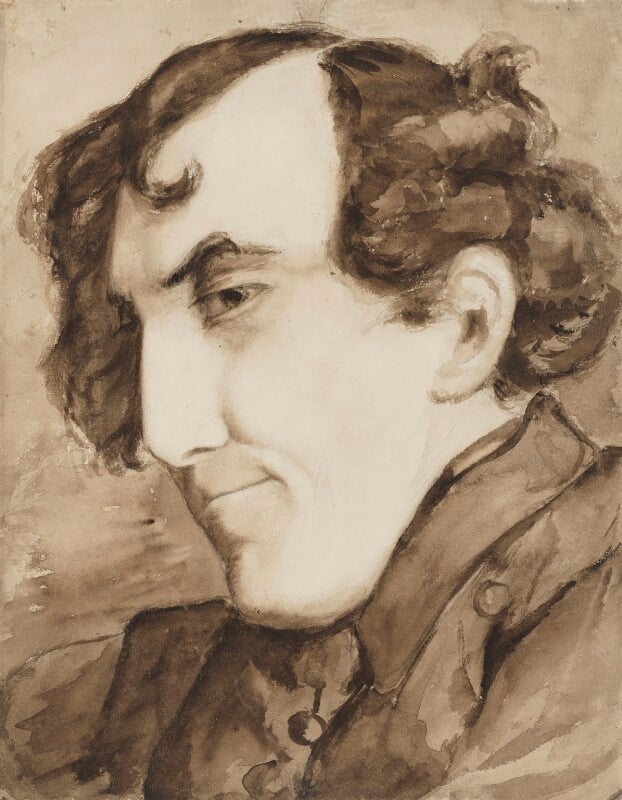 This is one of the most intriguing portraits of Henry Irving in the National Portrait Gallery Collection. A loosely sketched, life-size study of a head, it is taken not from a live sitting but a detail on a carte-de-visite photograph. The drawing is attributed to the popular Victorian artist Henry Courtney Selous. [1]

The photograph that so interested the artist showed Irving in a play based on The Pickwick Papers by Charles Dickens. The book was adapted for the theatre by James (‘Jim’) Albery in 1871 and staged at the Lyceum, with Irving taking the part of the strolling actor Alfred Jingle. [2] Theatre historian Jeffrey Richards has written: ‘Jingle, in his staccato speech, easygoing charm and self-confidence was a part that fitted Irving like a glove’; [3] and Irving’s Jingle did much to restore the Lyceum’s fortunes.

The original image of Irving straddling a chair, his legs thrust out in front of him, is one of five poses taken by the London Stereoscopic & Photographic Company. [4] Though the artist chose a full-length image he was only interested in the head; and to catch Irving’s cunning expression would have required skilful scaling-up. In the 1870s Selous, though in his seventies, was at the peak of his fortunes. As an artist he is remembered for outline illustration work, but he also ‘practised in large-scale work’, frescos and panoramas. [5] The sketch may have been made during the 1870s when Pickwick had two productions. [6]

The drawing was offered to the Gallery as a portrait of Henry Irving by Henry Courtney Selous, by Mr Malcolm Temple of Earls Court, London, in 1981. Impressed but perplexed by this head, curator Robin Gibson consulted the theatre historian Martin Holmes, stressing ‘there is […] absolutely no documentation to substantiate either the attribution or the identification’. Holmes was able to identify the photographic source but not the artist. [7]

At their meeting in May 1981 the Trustees approved the purchase – the sitter’s identity was not in doubt; the asking price of £240 was remitted to Mr Temple, and the drawing entered the Collection as a portrait of Irving by H.C. Selous. Documentation remains very slight, however, so pending further research NPG 5400 remains only attributed to Selous.

Purchased from Mr Malcolm Temple, May 1981.