7 of 122 portraits of Sir Henry Irving 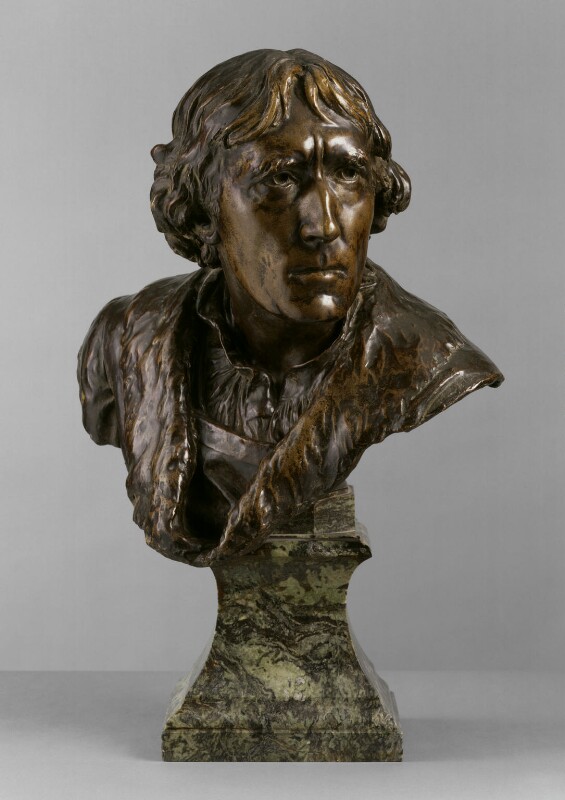 In January 1880, at their first meeting, Henry Irving was at the peak of his career, and (Edward) Onslow Ford a young sculptor with a five-year record of exhibiting at the Royal Academy. Irving was used to inciting admiration, and Ford was one of many seeking interviews, commissions or favours. [1]

Although Irving was in the throes of playing Shylock in his own production of The Merchant of Venice at this time, it was his Hamlet of the 1870s that interested the sculptor. Having studied art on the continent in the early 1870s, Ford had returned to London and may have seen Irving play a celebrated Hamlet at the Lyceum Theatre, during a run from October 1874 to June 1875. [2] He certainly did not miss Irving’s second great London Hamlet, which played through winter 1878 to spring 1879. Irving had recently assumed management of the Lyceum, and was opening the season with the play which had brought him fame in 1874. The success was repeated and indeed magnified by his directorship: ‘Tennyson, when he saw this production, said: “I did not think Irving could have improved upon his Hamlet of five years ago; he has done so – he has lifted it to heaven.”’ [3]

NPG 5689 belongs to a creative process that began in the 1870s and concluded in 1884, and must be understood in the context of all Onslow Ford’s sculptures of Irving. At this first meeting the sculptor showed Irving a ‘rough clay model of a seated figure […]. “I have been several times in the front row of the stalls watching as closely as I could. One cannot well model clay in the stalls of a theatre. But I did this after the first time, and I have had it with me on each other occasion.”’ [4] Impressed, Irving agreed to sit to Ford as a seated Hamlet; and he acquired the resultant bronze statuette. [5] Also in 1880, Ford presented the Lyceum’s business manager, Bram Stoker, with a little clay bust of Irving as Hamlet, in this case peering from under a cap, his shoulders swathed in a cloak; in 1881 he sent Irving twenty copies of this bust. [6]

Irving was so pleased with the bronze statuette ‘that he gave quite another series of sittings for [Ford] to do the life-size marble statue’. [7] This led to the sculpture Henry Irving as Hamlet, exhibited at the RA in 1884 (now at Guildhall Art Gallery, London), to which the bronze bust, NPG 5689, is directly related.

An early reference to a life-size statue is made in November 1882, when Onslow Ford invited Henry Loveday (the Lyceum stage manager) to view progress on ‘the statue’. [8] This would have been the full-size plaster model, exhibited in 1883 at the RA (since 1908 in the collection of Manchester City Art Gallery, inv. no.1908.43). [9] Arrangements to proceed with a marble version – at a cost of 1,000 guineas, to be paid by Irving, with an estimated date of completion in March 1884 – were finalized in spring 1883. [10] In February 1884 Ford was glad to report to Stoker that the statue was progressing well, and that the marble was proving ‘so far almost spotless’. [11] But when it was completed and paid for Irving refused to accept it, allegedly due to its bulk, and he directed Stoker to present it to the Guildhall Gallery instead: ‘Hang it all, Ford, a man cannot give his own statue; give it from yourself. I have paid you for it, so give it as a gift from you; I authorise you to.’ [12]

The bust NPG 5689 is a bronze with a light to dark-brown patination, well burnished, and supported on a marble socle. Each trait – Irving’s searching gaze under the furrowed brow, the details of the costume – has been skilfully conveyed from plaster to marble to bronze. Nothing is known of the bronze’s earliest history. It may have stood in a public place as in 1983 its base was observed to be ‘heavily coated in what appeared to be nicotine tar […] the presence of this nicotine tar perhaps suggests it was in a gentleman’s club’. [13] A bust of the 1884 portrait of Irving as Hamlet would have been a desirable object, and a standard ‘by-product’ of the main commission. [14] Yet only one other version of this bust is known, a bronzed plaster at Smallhythe Place, Kent (NT, Smallhythe Place, 1118510), which was possibly a model for NPG 5689.

The marble statue was praised for its realism by Marion Harry Spielmann in British Sculpture and Sculptors of To-Day (1901):

[The statue of “Henry Irving as Hamlet”] is a finely conceived piece of realism. The actor-Prince sits watching the King, no doubt, with eager face, in which the deeply set eyes are alert, and on which suspicion, hatred, and wistful sadness are subtly marked. The statue is realistic, romantic, picturesque; it was certainly original; and this, with the excellence of the likeness and the flesh-and-blood vitality of the figure as a whole, delighted the public, and proclaimed that Mr. Onslow Ford had achieved his first striking success. [15]

He used the word ‘realism’ advisedly, aware of its often negative connotations in the British press, in the context of contemporary art. On the other hand, Irving’s biographer Percy Fitzgerald (himself the creator of a bust of Irving as Hamlet; see ‘All known portraits, II. In stage character, Hamlet, 1878’) thought the statue a poor likeness. [16]

Years after, Irving remained on ‘old friend’ terms with Onslow Ford. He was Irving’s recommended sculptor for the memorial to Christopher Marlowe at Canterbury (unveiled 1891); and the sculptor of choice for the Lyceum Company in 1892, when it commissioned a statuette of Henry Irving as Mathias for presentation to ‘the Guv’nor’, on the twenty-first anniversary of his first appearance in The Bells. [17]

The bust appeared at Sotheby’s Belgravia, 25 November 1981 (lot 166, estimate £2,000/3,000), when it was bought by the Bruton Gallery Ltd. Two years later, the gallery offered it to the National Portrait Gallery for £6,000. The Trustees were keen to acquire it but thought it too expensive. A price of £5,400 was agreed, and Onslow Ford’s bronze bust of Irving entered the Collection in December 1983.