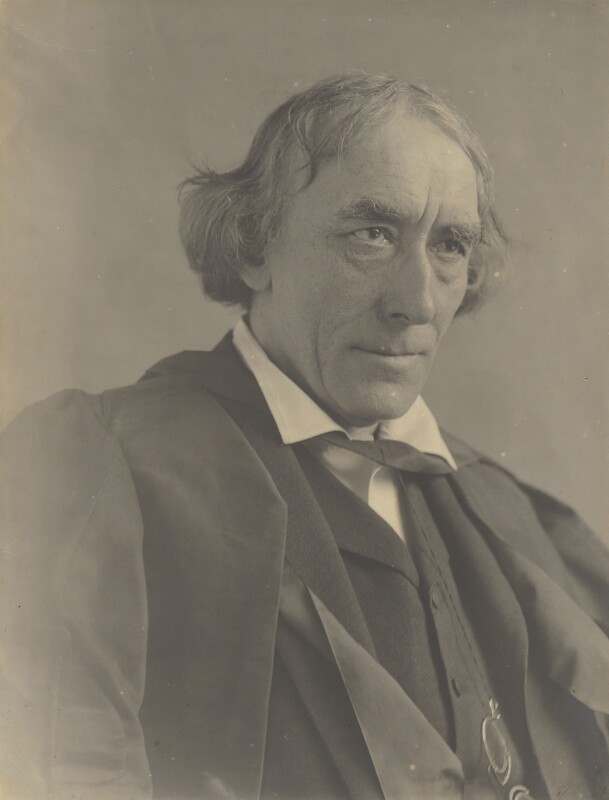 NPG P143 is the finest of three photographs taken by Eveleen Myers (née Tennant) of her ‘precious friend’ [1] Henry Irving (copies of the other two are NPG x19818 and NPG Ax68781). The sitting was the fruit of an acquaintanceship that had begun about twenty-five years earlier, when young Eveleen was playing in charity theatricals for which Irving provided the readings, in April 1874. [2] At that time her mother Gertrude Barbara Rich Tennant (née Collier), keen to marry off her daughters, was establishing a salon at their house in Whitehall. Here politicians and literary lions mixed with celebrities such as Irving; [3] and it was from here that Eveleen married Frederic William Henry Myers in 1880. The couple acquired Leckhampton House, Cambridge, where a photographic studio was built in 1888, to provide a ‘pleasant pastime’ for Eveleen. [4] In London they were guests at Irving’s Beefsteak Room suppers. [5]

Myers’s sitters soon began to include personalities from her mother’s salon, and comparisons were made between her and Julia Margaret Cameron. The historian John Addington Symonds, who sat to Myers in the 1880s, thought her portraits useful ‘contributions to art and to historical records’, and declared ‘a good photographic portrait has greater documentary value, deeper psychological veracity, than the best of paintings […] Mrs Cameron was successful in this branch of art […] Mrs Myers follows close upon her steps.’ [6]

In 1898 Henry Irving was invited by the University of Cambridge to deliver the Rede Lecture on 15 June, an event followed by conferral of an honorary D. Litt. His biographer Bram Stoker recalled the colourful ceremony: ‘Very picturesque the lecturer looked on the rostrum in his Dublin robes. These he exchanged later in the day, when he received his Cambridge degree, D. Litt. This dress, all scarlet and red with velvet hat, looked even more picturesque than that of Dublin University.’ [7] Irving was asked to stay at Leckhampton; and according to Stoker ‘[t]he next morning there was a delightful breakfast in the house of Frederick Myers – Mrs. Myers, formerly Miss Tennant, was an old friend of Irving. […] That night Irving played the Medicine Man at the Lyceum.’ [8]

With such a schedule it is unlikely – but possible – that Irving posed in his academic robes in the Leckhampton studio on 16 June 1898. He might have been photographed by Myers at a later date, too, perhaps in London, where she sometimes used the Whitehall house. [9] In any case, three photographs were taken between June 1898 and November 1900, when a photograph of Irving by Myers appeared in the Cambridge Graphic. This was probably this three-quarters-to right pose, being the best of the three.

Compared to many commercial photographers Eveleen Myers had little time for studio props, and NPG P143 is evidence of that. As a visitor to Leckhampton noted, ‘the absence of all properties, even those most often found in a photographic studio, is remarkable. It contains only a couple of plain screens, a few chairs, and a plain wooden negative cupboard, with, of course, a large camera.’ [10] And the naturalism of Myers’s portraits of Irving – the untidy grey hair and gritty complexion – bears witness to her belief that ‘in men’s heads the less retouching the better’. [11] To appreciate the originality of these minimally retouched portraits, compare them with studio photographs of Irving of a similar date, for example by Ernest Walter Histed (NPG Ax45814 or Window & Grove (NPG x19009.

Although The Times obituary for Myers cited her portrait of Irving among her greatest works, it was not much reproduced or well known. [12] It is possible, however, that Sir Thomas Brock knew and used her photographs when sculpting the Irving memorial in 1910, the sombre trio of heads – full face, profile and three-quarters turned – providing information for the statue in academic dress (see ‘All known portraits, I. In private character, Posthumous, 1910’).