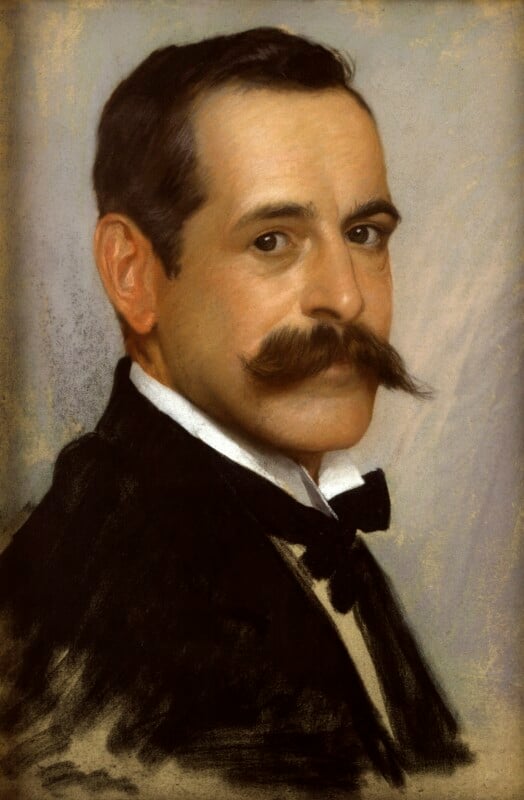 G.P. Jacomb-Hood’s iconography is fairly thin, which gives added value to his extant self-portrait, NPG 6083. The pastel is not signed or dated, and it is not referred to or reproduced in his autobiography, With Brush and Pencil (1925). Judging by the iconography, it shows him in his mid-forties: see the comparable, but probably slightly earlier platinum print by Frederick Hollyer (‘All known portraits, Photographs, c.1890’). The portrait was acquired framed. Evidence from trade labels on the back of stretcher and frame point to a possible framing date between 1898 and 1911.[1]

Sociable and urbane, Jacomb-Hood was a horse-riding companion of Sargent’s (his neighbour in Tite Street); a founder member of the Chelsea Arts Club; and a recorder of royal tours in India. In 1910 he married a daughter of baron de Hochepied Larpent. But he was always a thorough professional, appreciated for his punctuality at meeting illustration and copy deadlines, and was still producing work for Royal Academy exhibitions in his seventies. Jacomb-Hood was ‘bold and outspoken in his likes and dislikes’ and he ‘held sound views on the qualifications of a successful portrait painter’.[2] These traits are embodied in his trim appearance and the brisk handling of the life-sized head. For an extended discourse on the desirable qualities in an itinerant portrait painter, see Chapter 7 of the autobiography.

By descent in the artist’s family; given to the NPG by the sitter’s great-niece, Mrs Celia Ramsey, 1989.