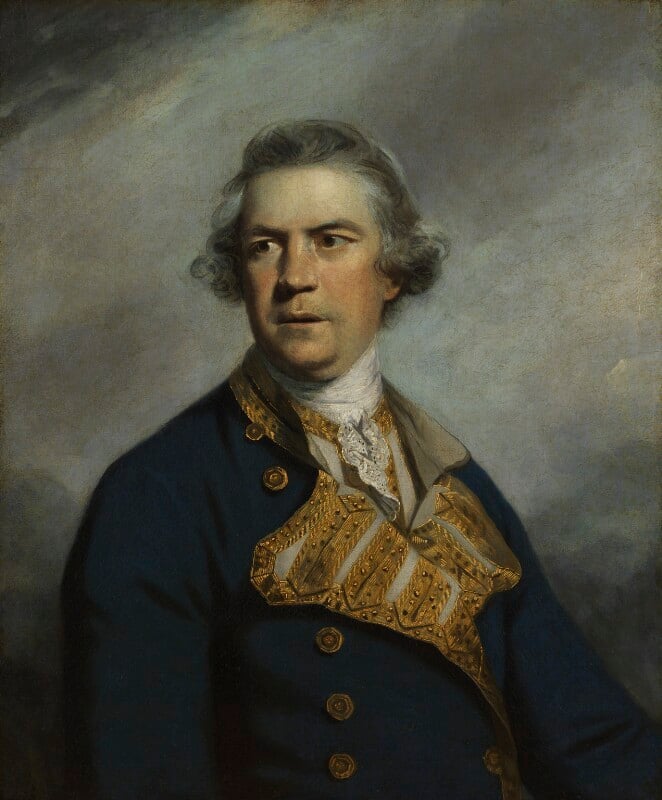 Reynolds painted seven portraits of Keppel between 1749 and 1785, but their relationship was based on friendship rather than patronage. They were of an age (Reynolds just two years older) and initially shared the interest of Lord Mount Edgcumbe, on whose suggestion Captain Keppel took Reynolds with him to the Mediterranean in 1749 as a guest on his ship the Centurion; ‘I had the use of his cabin’, wrote Reynolds, ‘and his study of books, as if they had been my own, and when he went ashore he generally took me with him ... as if I had travelled as his equal’. [1] Reynolds’s Italian studies, followed by his dramatic whole-length portrait of Keppel, launched his distinguished career.
NPG 5572 is a replica of the portrait now in the National Maritime Museum [2] which was probably painted for Lord Rockingham. It appears likely that NPG 5572 was still in Reynolds’s studio in 1779 when it was engraved by William Doughty (see NPG 179). A miniature copy of the head, attributed to James Smith, is in the Royal Collection, [3] and another, signed A. R., was sold Christie’s, 21 November 2000, lot 24.

1 A pencil annotation of 1835, apparently by William Cotton III, in a set of Hodgson & Graves Engravings from the Works of Sir Joshua Reynolds (I, p 80), Cottonian Collection, Plymouth (noted by D. Mannings, Sir Joshua Reynolds, I, 2000, no.1041).