2 of 30 portraits of Alphonse Legros 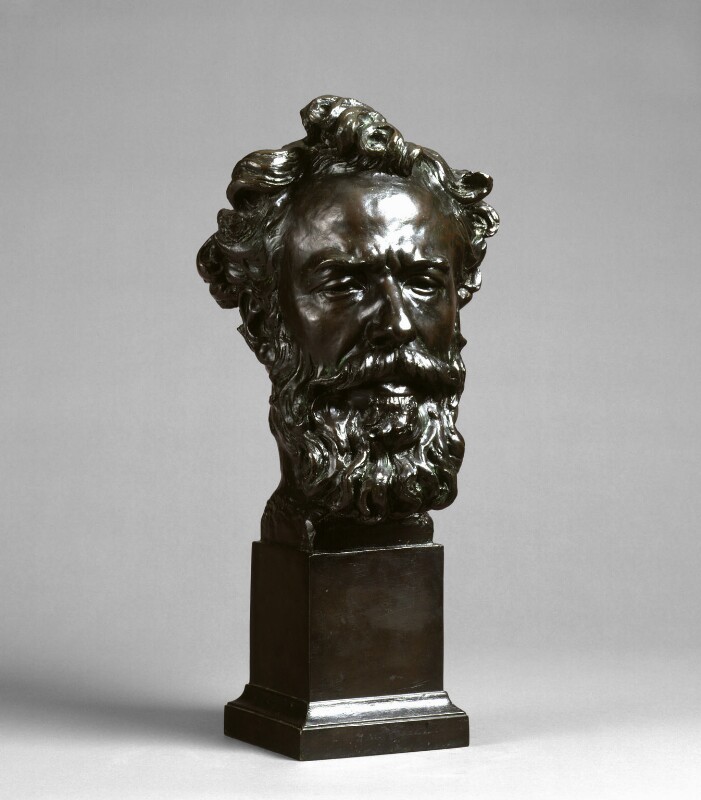 The French sculptor (Aimé-)Jules Dalou was an active member of Gustave Courbet’s Féderation des artistes and at the fall of the Commune he was forced into hiding. He came to London in 1871. Legros was one of his first contacts as the two had studied together at the École Impériale Spéciale de Dessin et de Mathémathiques (‘Petite École’) in Paris in the 1850s. Although he had been in England since 1863, Legros was still making a meagre living from occasional commissions. Conditions changed in 1876 when he was appointed professor at the Slade School of Fine Art, University College, London. From this post he was able to help promote Dalou to become assistant teacher of modelling at the National Art Training School: ‘If I, who have never learned English, can teach drawing at the “Sled-School”, why couldn’t Dalou, who can’t be worse than I at English, teach sculpture in another great school … at South Kensington, for example?’[1] Legros and Dalou both taught by example, through demonstration lessons.

Dalou sent sculpture to Royal Academy shows between 1872 and 1879. His entries included terracotta portraits of Leighton and Alma-Tadema in 1874, and one of Poynter in 1879. Dalou’s biographer Dreyfous records that the head of Legros was actually a fragment of a larger piece, originally a half-length figure of Legros holding palette and brush. The sculptor smashed the figure in a fit of dissatisfaction but the head was rescued from the bin by his pupil Edouard Lantéri. There are at least three extant plaster casts: a tinted plaster presented by Lantéri to the Musée des Beaux-Arts, Dijon, in 1897;[2] a painted plaster, formerly Lantéri Collection, Tate (3610), transferred to the Victoria and Albert Museum, London, 1979 (A.7-1993); and a plaster in the Strang Collection, University College London.[3] Bronze versions are found in several public collections as well as the National Portrait Gallery: the Fitzwilliam Museum, Cambridge (M.16-1950); the National Museum of Wales, Cardiff (NMW A 303); the National Gallery of Art, Washington, DC (1956.14.2: ‘cast possibly 1879/1920’);[4] and Cleveland Museum of Art, Ohio (1925.648). A bronze version was offered to the NPG in 1958 by the Leicester Galleries and declined.

The portrait of Legros is believed to have been modelled c.1876. [5] NPG 5313 bears no foundry mark, and is undated, but according to the vendor it is English, and ‘would have been cast almost certainly by Cantoni in Chelsea’.[6] It has a green and brown patina

Dalou returned to Paris in 1880. During his stay Legros made two portrait etchings of him, c.1876, around the date of the sculpture. One is unfinished and the other, one of Legros’s finest etched heads, was published in Portfolio, no.89 in May 1877.[7]

For details of reproductions of plasters and other bronze casts, see notes.