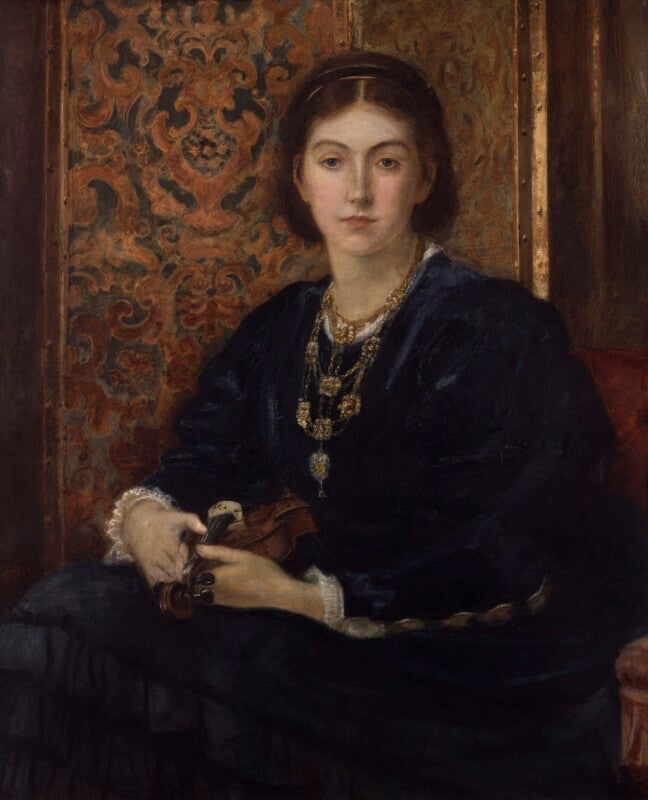 Signed in monogram and dated in red lower left: ‘JMJ 74’.

The sitter and artist Joseph Middleton Jopling were acquainted through her husband, Sir Coutts Lindsay, who like Jopling was active in both the Volunteer movement and the campaign to restore Warwick Castle.

Shown at the Royal Academy in 1874 as Lady Lindsay of Balcarres, this portrait was probably executed in London, possibly soon after the artist’s marriage in January 1874 to Louise Romer, later Jopling-Rowe, who became a good friend of the sitter. In late summer of the same year, the Joplings joined a houseparty at Balcarres, Fife, the Lindsays’ Scottish home, during which visit Louise Jopling worked on a picture of Blanche, entitled Looking Back .[1]

The sitter was an accomplished artist and musician, who at the same houseparty accompanied soprano Christine Nilsson in a recital of Schubert lieder; [2] she is depicted with her violin in portraits by her husband and George Frederic Watts (see ‘All known portraits, mid-1860s’ and ‘1877’). According to Louise Jopling, Blanche ‘painted remarkably well, played the violin and had a charming talent for writing short stories, drawing room plays and verses’. [3]