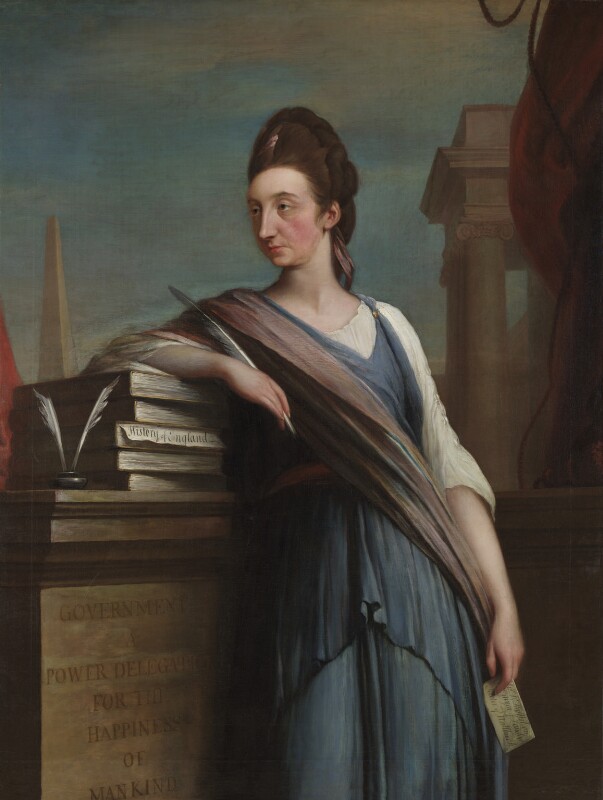 Cut down from the whole-length composition seen in Caldwall’s engraving of 1778, NPG 5856 now presents a mildly eccentric composition, with the head uncomfortably high within the canvas. It remains nonetheless of interest as a doctrinaire portrait of a remarkable woman.
It was painted in Bath, where Mrs Macaulay, then a relatively wealthy widow, had moved for her health in 1774. She had published the first five volumes of her History of England between 1763 and 1771 (as seen in NPG 5856; the sixth and seventh appeared in 1778 and 1783) and was already a celebrated figure. In Bath she met the widowed Thomas Wilson, absentee rector of St Stephen’s Walbrook and nearly thirty years her senior, who quickly became her champion, giving her commodious lodgings at Alfred House, adopting her daughter in April 1775, pledging an inheritance, [1] and rendering himself ‘truly ridiculous by the unaccountable frolicks of his attachment’. [2] The relationship ended with Mrs Macaulay’s second marriage in November 1778.
Both Macaulay and Wilson were ‘zealous for liberty’ and friends of Wilkes, and so was the artist Pine, who was living in Bath 1772-79. [3] A Spartan picture, NPG 5856 shows Mrs Macaulay in a Roman setting, dressed as a Roman matron but wearing a senator’s purple scarf, attributes synonymous with republican sympathies. [4] In 1772 her younger brother, the radical politician John Sawbridge, had been painted by Benjamin West as a Roman tribune. [5] In NPG 5856 prominent reference is made to her History of England, to Thomas Wilson and to a concept of democracy, through the inscription on the pedestal. The same (unidentified) [6] inscription appears on the scroll in the monument to Mrs Macaulay which Wilson commissioned from J. F. Moore [7]. All of which suggests that NPG 5856, which descended through the sitter’s family, may have been commissioned by Wilson, though that is unproven. Mrs Macaulay’s continued interest in Pine is indicated by a letter from George Washington, telling her of the artist’s activities in Philadelphia in 1787. [8]
Although sold in 1985 as by Pine, NPG 5856 was subsequently attributed to Chamberlin, [9] before reverting to Pine in 1990, [10] A whole-length portrait of Macaulay by Chamberlin, exhibited at the RA in 1774 was then described as

'bold, animated, and a good likeness of the original, but the under parts of the drapery are not cast full enough to give the whole sufficient ease; the general disposition of the picture, however, is very characteristic, she is drawn leaning on a term, supporting the volume of the history of England, on which is the following inscription: GOVERNMENT/A power, delegated for the happiness of mankind,/conducted by/Wisdom, Justice and/Mercy. [11]
An early 19th-century label on the verso of NPG 5856 states it was painted by Chamberlin. [12]

Brown eyes, brown hair with a purple ribbon, wearing a white tunic, a blue-grey dress and the purple scarf of a Roman senator; the paper in her left hand is inscribed: Revd Dr Thos Wilson/Citizen of London/and/Rector of Wallbrook.; a quill in her right hand; five uniform volumes lie on the plinth, the middle with a slip inscribed: History of England; the plinth is inscribed: GOVERNMENT/A/POWER DELEGATED/FOR THE/HAPPINESS/OF/MANKIND; bright red curtain to the left and a dark red curtain on the right.

[Probably commissioned by the Rev Thomas Wilson]; by descent within the sitter’s family to Matthew Fortescue-Brickdale; sold Christie’s, 22 November 1985,1 lot 121, bought in; purchased from Christie’s, 1985.

J. Caldwell (without artist's name) as whole length with, added to the inscription on the pedestal: /CONDUCTED/BY/WISDOM/JUSTICE/AND/MERCY/C MACAULAY. - presumably the engraving of Mrs Macauly Caldwall exhibited Free Society of Artists, London, 1778 (30); anon. reversed (whole length) with, below, the approximate arms of Sawbridge of Olantigh.1

1 Or, two bars az. each charged with a barrulet dancettée ar., crest a head, bearded and hatted, and motto WISDOM AND FORTIT[UDE]; neither crest nor motto recorded in Burke's General Armory.