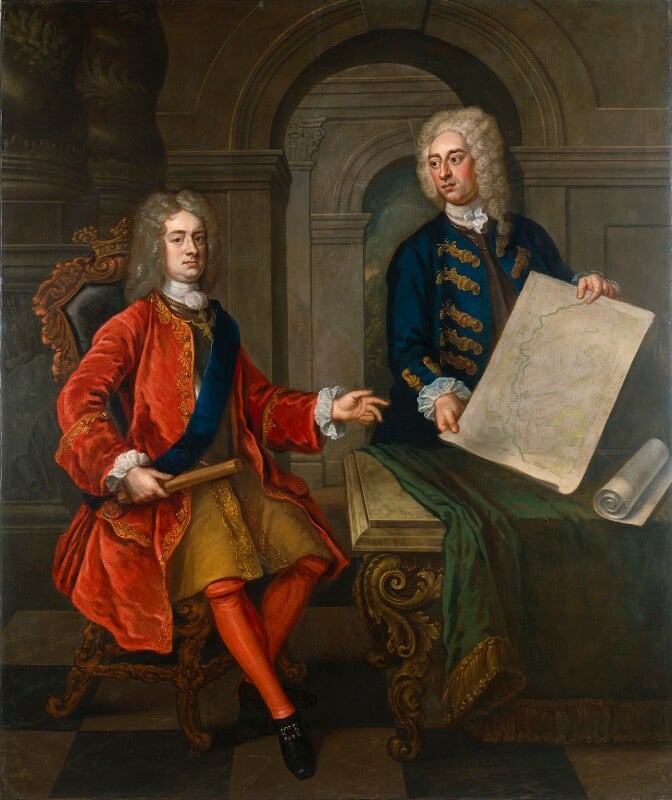 Colonel John Armstrong (1674-1742) was one of Marlborough’s most accomplished staff officers.
NPG 5318 is one of three versions, the others being at Blenheim [1] and formerly with Colonel Armstrong’s descendants. [2] In each the figure of Armstrong remains virtually unchanged, while the figure of Marlborough, the setting and the map differ. The map in the Blenheim picture is inscribed PLAN of the SIEGE OF BOUCHAIN, and in the Armstrong version Marlborough … Bouchaine. Marlborough considered the capture of the fort of Bouchain, his last great action, to be one of his greatest exploits and he had relied throughout on Armstrong’s engineering skills. [3]
It may perhaps be assumed that the Blenheim version by Enoch Seeman was the first; the Armstrong picture (clearly inferior) followed, and NPG 5318, a domesticated adaptation, could have been commissioned some years later. Both men retain officers’ dress but the scene has moved from a tent in Flanders to an imposing domestic interior (somewhat suggestive of Blenheim). The figure of Marlborough recalls the lost Kneller portrait engraved by Faber in 1735 and the setting recalls the composite portrait attributed to Enoch Seeman (derived from Riley and Kneller) of the Duke and Duchess.

1) G. Scharf, Catalogue raisonné; or, A List of the Pictures in Blenheim Palace, 1862, p 132 as by Kneller; exhibited Second Special Exhibition of National Portraits ( ... William and Mary to MDCCC), South Kensington, 1867, no.87; listed by D. Piper, Catalogue of the Seventeenth Century Portraits in the National Portrait Gallery 1625-1714, 1963, p 219 as by Isaac Whood. The Duchess told her granddaughter Diana: ‘Seeman copies very well, and sometimes draws the faces like. I really think that picture of your Grandfather with Mr Armstrong in my bedchamber in London was as like him as ever I saw, and he was so humble as to ask me but seventeen guineas for both figures’ (18 July 1734; G. S. Thomson, Letters of a Grandmother, 1943, p 136). This letter may imply the picture was painted for the Duchess after Marlborough’s death in 1722. A bust-length miniature by William Grimaldi 1806 was based on Marlborough’s portrait in this picture (then at Marlborough House).
2) Illus. W. S. Churchill, Marlborough and His Times, 1938, IV, f.p.444; probably that sold Sotheby’s, 22 May 1957, lot 174, described as set beneath a tree with a distant town, the map inscribed … Bouchaine (102 x 91); it appears in the background of a double portrait attributed to Zoffany of Mary and Priscilla Armstrong, the General’s youngest daughters, exhibited English Pictures for the Country, Leger Galleries, 1986, no.3.
3) ‘At the siege of Bouchain in August 1711 Armstrong threw up overnight a substantial battery with which the enemy works were bombarded at daylight. This feat won him Marlborough’s undying gratitude’ (P. Latcham, Oxford Dictionary of National Biography).

1 Mr Bentley 52 is inscribed on the old stretcher beneath the canvas turn over.