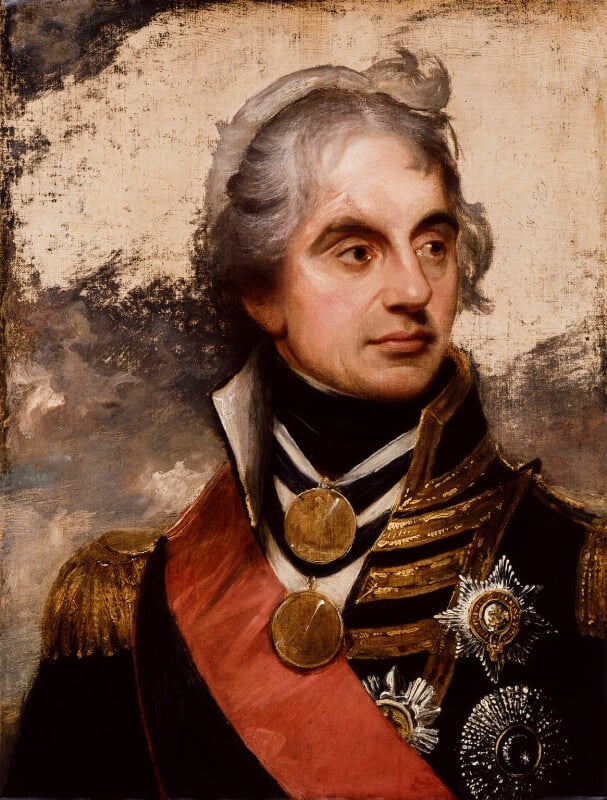 Nelson returned home from the Mediterranean late in 1800, not only the Hero of the Nile but the fascinating subject of a particularly juicy scandal. The portraits put about by Abbott had satisfied the public demand up to a point but from his arrival in London a spate of artists set to work to immortalise his features still more. Nelson was probably the most distinguished man Norfolk had ever produced and the City of Norwich, hitherto rather luke-warm about its famous son, decided that it too should honour the hero with a portrait. Nelson himself had presented the City with the Spanish Admiral's sword surrendered at Cape St Vincent in 1797 and had been awarded the Freedom of the City in return. Beechey was a fairly obvious choice, a distinguished portrait-painter having married a Norfolk girl and having already painted Nelson's father. The Chamberlain of Norwich commissioned it 'in Remembrance of the signal Services to his King and Country ...', sittings were given probably in November or December and the finished whole-length was exhibited at the Royal Academy in May 1801, where the colouring was criticised as being preposterously high and the whole effect more 'like a caricature than a portrait of the Hero of the Nile'. But the citizens of Norwich were satisfied and provided an elaborate gilt frame of carved wood surmounted by Nelson's armorial shield and a fulsome inscription celebrating his Undaunted Valour and most Consummate Skill. Copies were ordered for the City of London and the Drapers' Company, and Nelson became honorary godfather to Beechey's son Charles, giving him the cocked hat he had worn at the Nile.
Recalling the sittings several years later Beechey said 'his cheek had rather an Infantine plumpness' - a noticeable feature of the Abbott portraits but less so in the post-Nile portraits by Guzzardi, Grignion, Füger and others, where the face has a distinctly lean aspect. In fact it is surprising that Beechey should have made this comment, all the more curious in his observation of Nelson's eyes being light brown. Apart from the witness of other artists we have Nelson's own word for it that his eyes were blue: 'the blemish is nothing, not to be perceived unless told', he wrote home after Calvi, 'the pupil is nearly the size of the blue part'. None the less Beechey's sketch is a remarkable achievement. In spite of the mistaken colouring of the eyes there is altogether a closeness of observation handed down to posterity by an artist, by no means in the first rank certainly but with an integrity that insures this image of the great Admiral to be as close and faithful as we are likely to see. The Nile scar, the film over the right eye, even the strange alteration to the shape of the head, combine to give the sketch an air of quiet self-confidence that is missing from all other portraits.

Head and shoulders in rear-admiral's full-dress uniform, the silver stars on the epaulettes not shown (Nelson was promoted Vice-Admiral of the Blue, 1 January 1801); Ribbons of the Bath and St Ferdinand, Stars of the Bath (above), St Ferdinand and the Crescent; two Naval Gold Medals (St Vincent and the Nile) on blue ribbons against a white shirt and dark blue neckcloth; grey hair altered from an earlier position on the head to coincide with the revised and finished version at Norwich; light brown eyes and the Nile scar over his right eye which is noticeably less lustrous than the left though there is no sign of pterygia in either aspect.

5 other 'preliminary' sketches are recorded. NPG L129 could conceivably have belonged to the Earl of St Vincent, engraved in 1815, sold at St Vincent's death in 1823 and bought back by Beechey himself. Thereafter it remained in the Beechey family, given by the artist to his son in 1830, by descent to G. B. Dixon and on his death in 1856 to his widow Margaret Dixon; sold at Bonham's 21 July 1966 (241) bought Hugh Leggatt, placed on loan by the Trustees of Mr Hugh Leggatt's settlement from 1566; bought by the NPG 1985 (now NPG 5798).

Stipple vignette ('From the original Picture by Sir William Beechey, R.A. in the Possession of the Earl of St Vincent') by R. Cooper for Cadell & Davies's Contemporary Portraits, 1815; mezzotint by Lawrence Josset 1968.