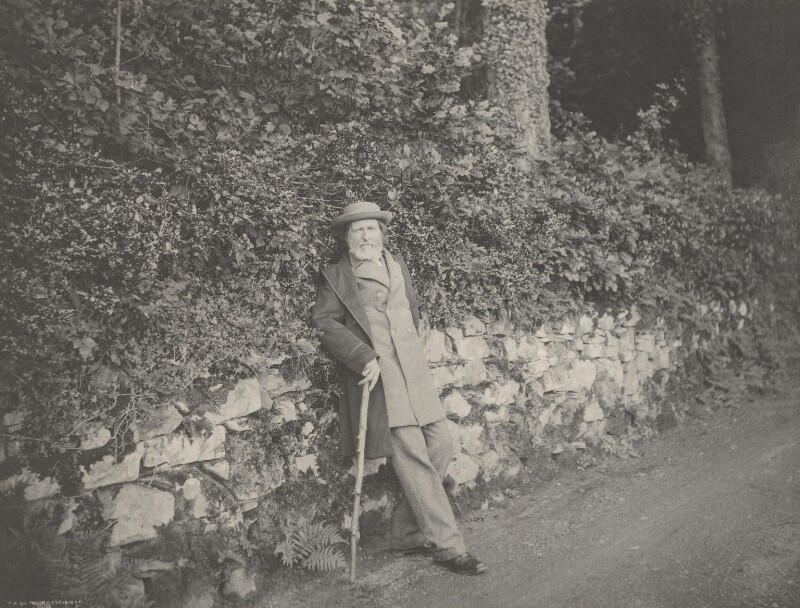 ‘After he returned to Brantwood in June 1885 [sic] Ruskin again was photographed in a sylvan setting … on this occasion his beard had been trimmed so it was nicer to look at, and the setting was natural … the wall of the north drive at Brantwood. The photographers were the Green Brothers of Grasmere.’ [1]

While Dearden’s dating is very plausible, the image was in fact registered by the Greens, then operating in St Bees, Cumbria, on 22 September 1881 and was probably taken one or two weeks earlier; though the season is not immediately apparent in the image, the foliage and Ruskin’s relatively lightweight garments suggest a warm day. In February 1881 Ruskin was first afflicted with delirium; during this illness, he stopped shaving and this is perhaps the earliest image of him bearded. By September, he was sufficiently recovered to take visitors on rambles round the Brantwood grounds and up onto the moorland, ‘walking slowly and pointing out to you his pet bits of rock-cleavage, or ivied trunk, or nest of wild strawberry plants’. [2]

Brantwood was Ruskin’s home on the shores of Coniston Water, Cumbria. Whether by accident or design, his position here against a drystone wall with well-defined ferns, moss and ivies is evocative of his own art and earlier promotion of pictorial observation and ‘truth to nature’. In this respect the photograph offers a quasi-reprise of John Everett Millais’s celebrated oil portrait of Ruskin at Glenfinlas (1853–4), although it can also be compared with Frank Meadow Sutcliffe’s outdoor photograph taken in autumn 1873 (for both see ‘All known portraits’). Two poses were taken, the second showing Ruskin standing before rather than leaning against the wall; both were registered by the Greens, whose negatives were later acquired by another Lakeland photographic firm named Abraham Bros., which has sometimes been credited with this image.

A third photograph, showing Ruskin with members of his household, including the Severns and Sara Anderson, seated on grass outside the house overlooking Coniston Water, was registered by the Greens at the same time. [3]

Another original print is in The Rob Dickins Collection, Watts Gallery, Compton, (COMWG2008.3724), together with two postcards featuring a cropped version (COMWG2008.366 and 367|http://wattsgallery.adlibsoft.com/search.aspx?formtype=advanced}).