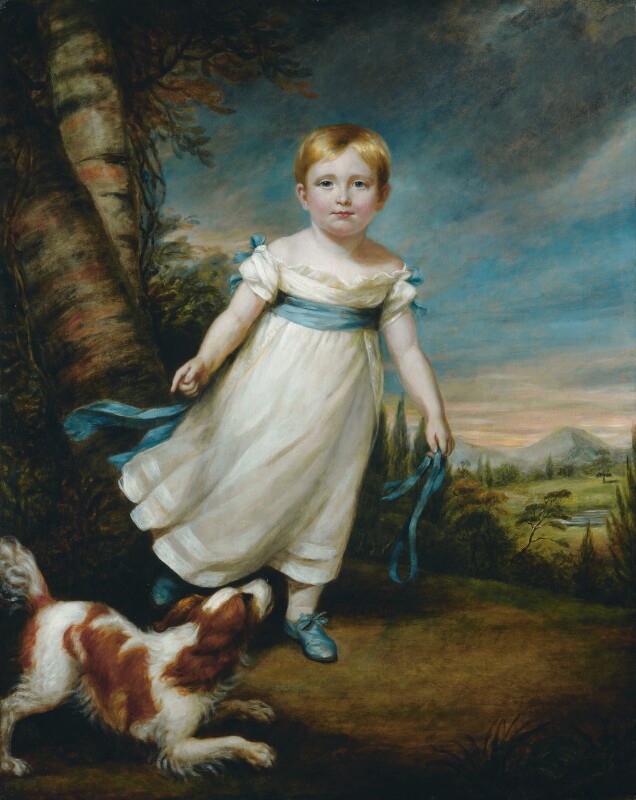 Commissioned by the sitter’s father, this depicts John Ruskin aged 3; it was executed in Northcote’s studio at 39 Argyll Street, London.

According to the sitter, it shows ‘a very pretty child with yellow hair, dressed in a white frock like a girl, with a broad light-blue sash and blue shoes to match; the feet of the child wholesomely large in proportion to the body; and the shoes still more wholesomely large in proportion to the feet.’ He explained that ‘these articles of my daily dress were all sent to the old painter for perfect realisation; but they appear in the picture more remarkable than they were in the nursery because I am represented as running in a field at the edge of a wood with the trunks of its trees striped across in the manner of Sir Joshua Reynolds’. He added that, when asked, he had requested ‘blue hills’ in the background. [1] The King Charles spaniel was one of a sequence of dogs in the Ruskin household. A faint pentimento shows that the blue ribbon in Ruskin’s left hand was originally linked to the dog.

James Northcote was a pupil and friend of Joshua Reynolds, and a leading portraitist of his day. He followed up this work by requesting that young Ruskin model for a subject picture variously known as The Sylvan Doctor and The Thorn in the Foot (see ‘All known portraits, By other artists, 1823’), which was accordingly purchased by Ruskin’s father.

The portrait remained with Ruskin until his death. It is seen hanging between portraits of his parents in the dining room at his home, Brantwood, Coniston, in photographs from the 1890s (NPG x12196 and NPG x12197; see also Dearden 1999, p.24). Sold from the Ruskin estate in 1931, it was acquired by a collector in New York in 1951, and eventually purchased from Sotheby’s in 1987, with the intention it be returned on indefinite loan to Brantwood, where it has since hung, in the same location as placed by Ruskin. [2]

Sitter and heirs; Sotheby’s, 20 May 1931 (125); Sotheby’s, 18 Nov. 1987 (57) purchased with assistance from the NHMF and NACF (the Vera and Aileen Woodroffe Bequest) with the intention of placing it on indefinite loan at Brantwood, Cumbria, managed by the Ruskin Education Trust.