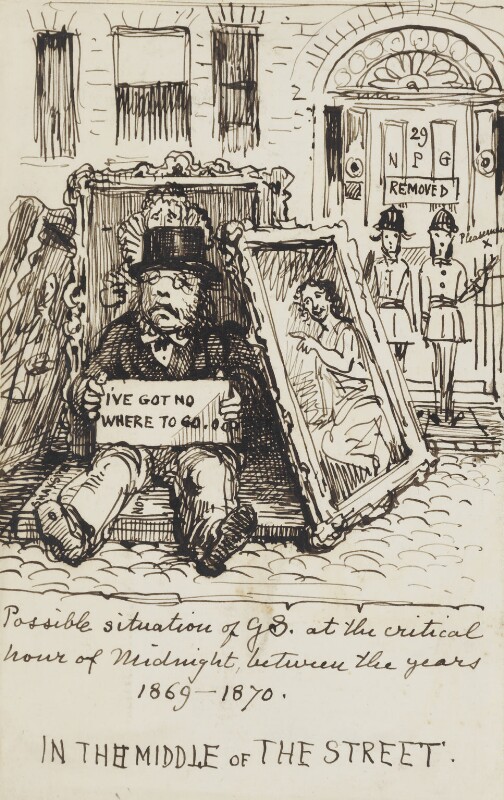 This caricature was probably drawn in early 1869, soon after it was decided to move the National Portrait Gallery collections from 29 Great George Street to a part of the South Kensington Museum. [1]

As the institution’s Secretary, Scharf had lived over the Gallery since 1859, so the prospect of a double move, though welcome for the collection, must have been disturbing. He started looking for new accommodation in June, and rooms were found at 8 Ashley Place on 20 July 1869. [2] Presumably after this he would not have been so worried about homelessness (‘in the middle of the street’) to pen such a sketch.

The moves took place in December. ‘Slept in my own bedroom & for the last time at 29 Gt. George St. Westminster,’ he noted on 17 December. [3] He oversaw the removal of paintings and sculpture to South Kensington between 20 and 24 December. Both moves were completed by Christmas Day.

Unusually for portraits of Scharf, NPG 5344 was not part of his 1895 bequest to the NPG. It originally formed part of an album of watercolours by the Hon. Charles Stewart Hardinge, later Viscount Hardinge, who was a trustee and a friend of Scharf’s (see ‘All known portraits, By other artists, 1882’). In 1980 the drawing was offered to the Gallery by J.S. Maas & Co. Ltd for what was considered an expensive sum: ‘I gather the price is £200, which must be a world record for Scharf’, wrote the Deputy Director R.L. Ormond to the gallery director Jeremy Maas, ‘but you have us by the short hairs. Do we get a small discount?’ [4] In the end the drawing was sold to the Gallery in a personal transaction by Maas, at the lower price of £160.

Whole-length, full-face, with hat and spectacles, seated in the street (as a beggar) in a heap of paintings, outside his home and Gallery premises, 29 Great George Street.