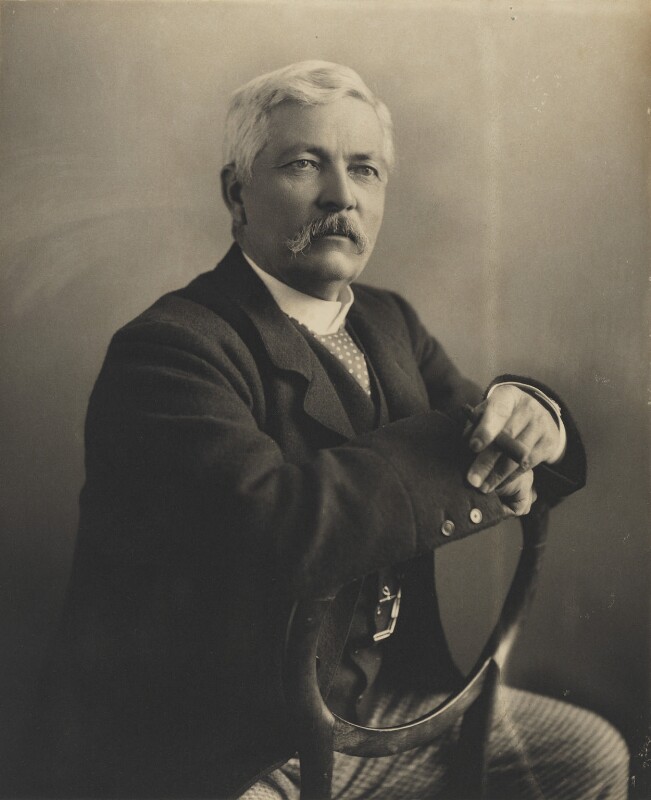 Eveleen Myers (neé Tennant) was the youngest of three sisters and daughter of Charles Tennant, a landowner and Liberal MP. In the 1870s the family moved to 2 Richmond Terrace, Whitehall, where her mother Gertrude Tennant conducted a highly successful salon, attracting a variety of leading figures of the period. Eveleen married the poet and essayist Frederic William Henry Myers in 1880, taking up photography in 1888 with the initial intention of capturing the fleeting early years of her three children. Although she was largely self-taught, Myers’s technique was probably influenced by the work of a number of contemporary photographers and also that of Julia Margaret Cameron, for whom she sat on a childhood visit to the Isle of Wight. Amongst her most accomplished photographs are the naturally lit and simply posed portrait heads, many of which are of the well-known individuals that she and her husband entertained at Leckhampton House, their Cambridgeshire home, and her mother’s house in London.[1]

On 12 July 1890, after an on-off courtship, Stanley married Eveleen’s elder sister Dorothy in a lavish ceremony at Westminster Abbey. It is likely that the photographer first met the sitter in the summer of 1885, when he was regularly invited to dine at Richmond Terrace. From the beginning of 1887 Stanley was away in central Africa leading the Emin Pasha Relief Expedition. Upon his return to London in April 1890 he was greeted by cheering crowds. This preceded a month of banquets, lectures and celebratory occasions in his honour.[2] In August, Eveleen visited Stanley and Dorothy on their honeymoon at Melchett Court in the New Forest. In letters to her husband she describes the newlyweds as ‘so strange together!! & odd and happy’ and Stanley as ‘so wonderfully charming, so boyish and so loving’.[3] She captures this quality of bashful good humour in a photograph taken of the couple seated on a garden bench, against the backdrop of the house (NPG Ax68486).[4]

It is probable that NPG P145 was executed at a similar date, possibly between the wedding and Stanley’s departure for a lecture tour in the United States in the autumn of 1890. The location for the photograph is similarly undefined. It is possible that he sat for Eveleen at Richmond Terrace, where he took up residence with Dorothy after their marriage. Alternatively, it is known that Stanley received an honorary degree at Cambridge on 10 October 1890.[5] The photographer may have used this opportunity to capture the sitter in her studio at Leckhampton.[6] Stanley was certainly a friend of the Myers family. Upon hearing of his engagement in May 1890, F.W.H. Myers sent the explorer a detailed and welcoming letter, and the two men soon became friends.[7] He went on to offer advice to Stanley when he subsequently faced a raft of charges concerning the fate of the Relief Expedition’s rear column, which he had left under the control of his second-in-command.[8] The sitter also formed a close relationship with the Myerses’ elder son, of which his parents approved: ‘I very much like Stanley’s companionship for Leo; I should like Leo to learn much from him! … and get a notion of a hero from him.…’[9]

In contrast to many photographs of the sitter throughout his lifetime, Myers’s image is a particularly candid portrait, unusual in that it indicates the softer side of Stanley’s character. The neutral background ensures that emphasis is placed upon the figure, whilst subtle shadows help to define the contours of his face. Leaning casually against the chairback with a cigar, his expression is both thoughtful and trusting as he stares into the middle distance. This is an attitude that only public recognition and new-found domestic stability had afforded. In many earlier images Stanley appears stern, guarded and even arrogant: an effective mask under which he disguised the hurt of personal disappointments. An early example from c.1863 shows Stanley in his twenties, with a defiant and proud look on his face belying the trauma of his childhood years. Similarly, in a set of photographs from 1872 by the London Stereoscopic Company (showing the explorer in the clothes he wore when he encountered David Livingstone), the sitter’s expression is withdrawn, his features set in an attitude of steely determination after having been insulted by the Royal Geographical Society despite the recent success of his first African expedition (see ‘All known portraits, Photographs’ for these examples).

A contrast between the public and the private Stanley was apparent to Dorothy from the early stages of their friendship:

When he is telling us some thrilling adventure in Africa, he conveys his meaning as often by gesture as by word.… When he is pleased, he softly rubs his hands together, with invisible soap.… But this is Stanley ‘intime’. The better known usual Stanley is cold, silent, rather disdainful, slightly chilling people by his silent observant attitude, making them feel uneasy.… He has, I should say, a rich vein of tenderness underlying the surface of will and masterfulness.[10]
Soon after their first meeting in 1885, when painting Stanley’s portrait (see ‘All known portraits, Paintings, drawings, sculptures and prints’), she saw through his facade: ‘I felt so sorry for him, there is a loneliness and disappointment about his life, which he will not allow, but which I see.…’[11] Prior to 1890, Stanley found solace for his private emptiness in the challenge of travel and the struggle against difficulties. Yet this longing for fulfilment in Africa and elsewhere denied him the very comfort and support that he believed he could achieve through a stable and loving marriage. His union with Dorothy seems to have brought a measure of inner peace late in his life and this is reflected in Myers’s photograph, where the protective guard has slipped and the combined qualities of strength, vulnerability and inherent curiosity are effectively portrayed. In a favourable review of Eveleen’s photographic portraiture, John Addington Symonds acknowledged that her works of this type have ‘greater documentary value, deeper psychological veracity, than the best of paintings’.[12]

NPG P145 was purchased from Sotheby’s Belgravia on 27 June 1980, along with four other portrait photographs by Myers.[13] In 1991 the National Portrait Gallery also acquired two of the photographer’s personal albums, which proved a valuable addition to the earlier collection of images of celebrated subjects.[14]

Half-length to right, slightly profile to right, seated astride chair, leaning forwards with elbows resting across the chairback and hands together, holding a cigar in left hand, wearing checked trousers and a spotted cravat.

Purchased by the National Portrait Gallery from Sotheby’s, Belgravia, 27 June 1980 (part of lot 343).