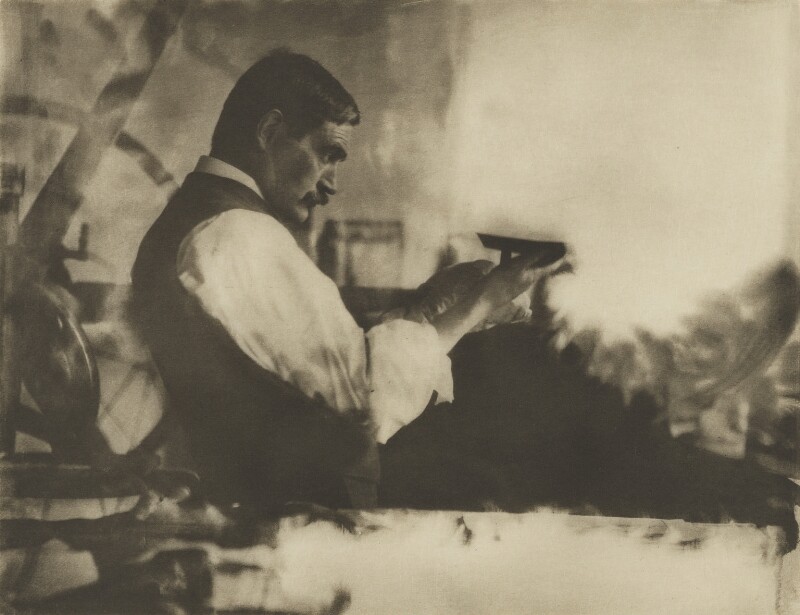 Sitter and artist were longstanding friends, probably from Annan’s time in London in 1885–7, who shared an interest in print-making. The original image (see ‘All known portraits, Photographs, 1902’) was exhibited in 1902, and has been described as ‘a portrait of an artist in full creative flow’. [1] It depicts Strang at his workbench, intently inspecting an etched plate held up to shoulder height. It is assumed that the photographic session took place in Strang’s studio in St John’s Wood and was part of a reciprocal project, since Strang’s portrait drawing of Annan (SNPG 2205) dates from the same year. The soft focus and sfumato background effects give the image an atmospheric aspect comparable to that of a brush and ink sketch.

James Craig Annan was a pioneering photographer based in Scotland, best known for his original photogravures and for his exhibited work in Britain, Europe and the USA, where he collaborated with Alfred Stieglitz. He joined the Linked Ring Brotherhood in 1894, and in 1924 became honorary fellow of the Royal Photographic Society. Through the family firm, T. & R. Annan & Sons, Glasgow, he also printed the work of other photographers, as well as etchings and engravings by Strang, Muirhead Bone and other artists. Around 1898, Strang sat to Annan for a studio portrait, and in 1909 for formal portraits marking his honorary degree from Glasgow University (see ‘All known portraits, Photographs, 1908–9’). In 1916 Strang produced an etched portrait of Annan (BM, London, 1923,0209.3).

When first exhibited, the image showed the sitter facing left and was entitled The Etching Printer. Measuring 362 by 292 millimetres, it was shown with another portrait of Strang; [2] both exhibits were described as ‘wearing much the appearance of etchings, by the way, [and] are daring experiments … but, as Mr Annan’s work, leave the observer unsatisfied’. [3] Another critic wrote that the
‘Etching Printer is full of controlled action’. [4]

The present work is a photogravure of smaller dimensions issued in Camera Work, no.19, July 1907 (as The Etching Printer – William Strang Esq., A.R.A), [5] in which the image has been reversed and slightly adjusted to focus on the figure. It has become one of Annan’s most admired works. [6]

In photogravure, the plate to which a negative image has been transferred is then manipulated like an etching. In this instance, ‘Annan worked the plate aggressively, fading out both background and foreground to allow concentration on the real subject which is an artist in the heat of work’, [7] with the image focusing on the sitter’s ‘intense, practised glance at the etching plate balancing so delicately on his fingers … it is done with immense panache’. [8]

Another impression, from Strang’s own copy of Camera Work, no.19, now in the Mitchell Library, Glasgow University, was exhibited in Glasgow Portraits by J. Craig Annan, Scottish Arts Council touring exhibition, 1967–8 (50); and The Art of the Photographer J. Craig Annan 1864–1946, National Gallery of Scotland, 1992 (13).

Reproductions of other prints of this image
Buchanan 1992, no.13 (from the print in the Mitchell Library, Glasgow).