3 of 26 portraits of Jonathan Swift 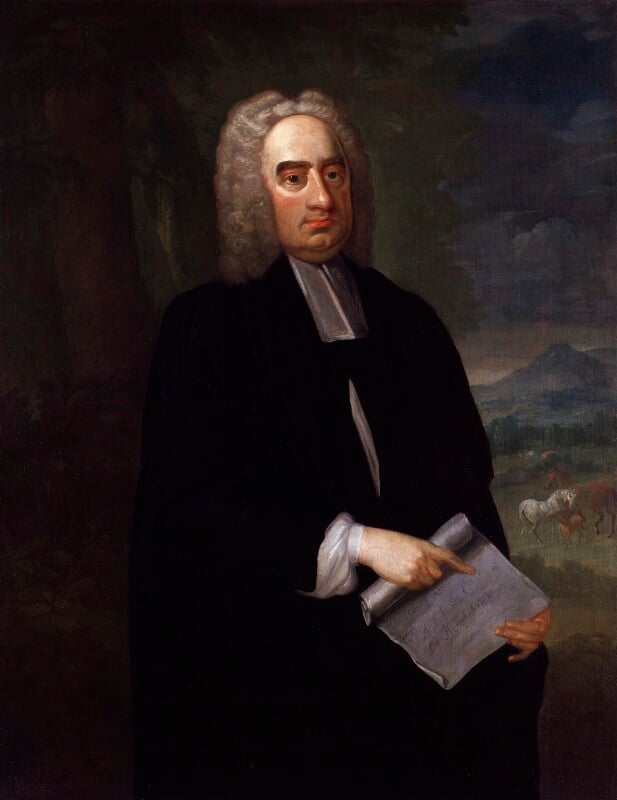 The scroll inscribed: Travels by Lemuel Gulliver/A Voyage to the Country of/the Houyhnhnms; an additional inscription at the foot of the scroll: F. Bindon Pinxt/17[26]1 was found to be an addition and removed in cleaning.

Bindon painted four variants of Swift’s portrait between 1735 and c.1740, each using a similar head looking half right, showing Swift with wig, gown and bands, his half-undone waistcoat revealing a glimpse of his white shirt, holding a scroll (variously inscribed with reference to his works), his right hand with a distinctively long forefinger.
NPG 5319, showing in the right distance the houyhnhnms from Gulliver’s Travels, relates closely to Bindon’s three-quarter-length in the National Gallery of Ireland (598), in which the scroll is inscribed: Drapiers fourth Letter to the whole People of Ireland, and a statue of Apollo appears in the closed right background. [1]
Both portraits derive from the whole-length at Howth Castle painted in 1735, possibly the first of Bindon’s Swift portraits. It shows the scroll held with both hands, again inscribed Drapiers fourth Letter to the whole People of Ireland, and an elaborate background with the Genius of Ireland on the left trampling on the figure of Wood and indicating the Temple of Fame upper right [2] (William Wood, 1671-1730, the patentee of Wood’s halfpence, imposed on the Irish without consultation in 1722, but withdrawn from circulation in 1725, largely due to Swift’s protests in the Drapier Letters).
In 1874 Thomas Bateman of Moor Park purchased a portrait by Bindon from St Patrick’s Cathedral, Dublin, ‘in all probability one of his replicas of the Howth picture painted a few years before’. [3]