2 of 14 portraits of Sir James Thornhill 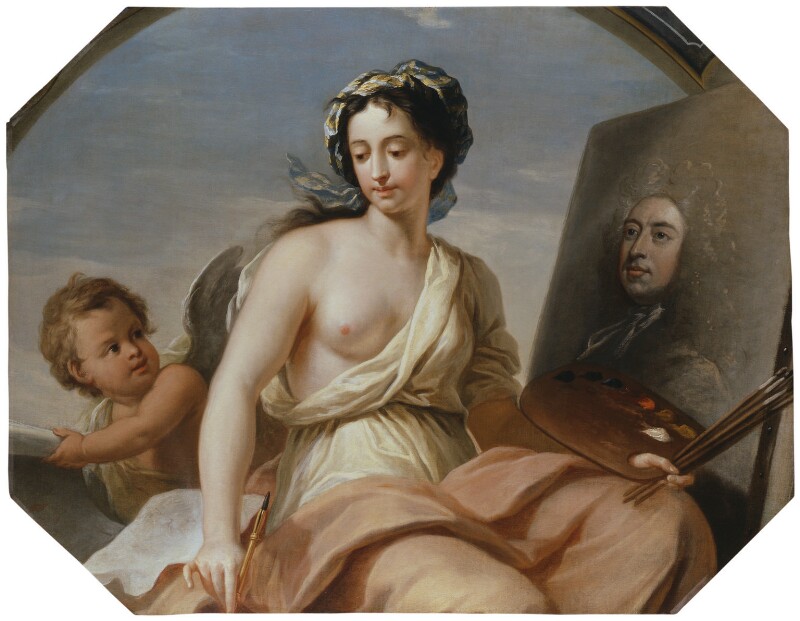 The composition shows a portrait of the middle-aged Thornhill (compare NPG 3962) set on an easel before an allegorical figure with palette and brushes in her left hand and a porte-crayon in her right; behind her a winged putto unfurls a scroll and the drawing of an old man’s head lies behind her arm.
NPG 5339 is dated solely by Thornhill’s appearance. It is not known whether it ever formed part of a decorative scheme, though the existence of a companion piece, an Allegory of Medicine, makes this probable.

‘From an Irish collection … believed to have been painted for the Library at Headley Park’;1 Christie’s, 23 June 1978, lot 117 as an Allegory of Painting, paired with an Allegory of Medicine; Sabin Galleries, from whom purchased 1980.

1 As described by Sabin, receipt of 18 November 1980 (on file). E. Croft-Murray, Decorative Painting in England, I, Early Tudor to Sir James Thornhill, 1962, p 270 described the ceiling, painted for William Huggins at Headley Park, as ‘Minerva and History attended by putti symbolizing the Arts, one with a male portrait. Destroyed after 1808.’ Nicols & Steevens, Genuine Works of Hogarth, I, 1808, p 44, described Thornhill’s allegorical ceiling at Headley as the story of Zephyrus and Flora, ‘the figure of a Satyr and some others … painted by Hogarth’.