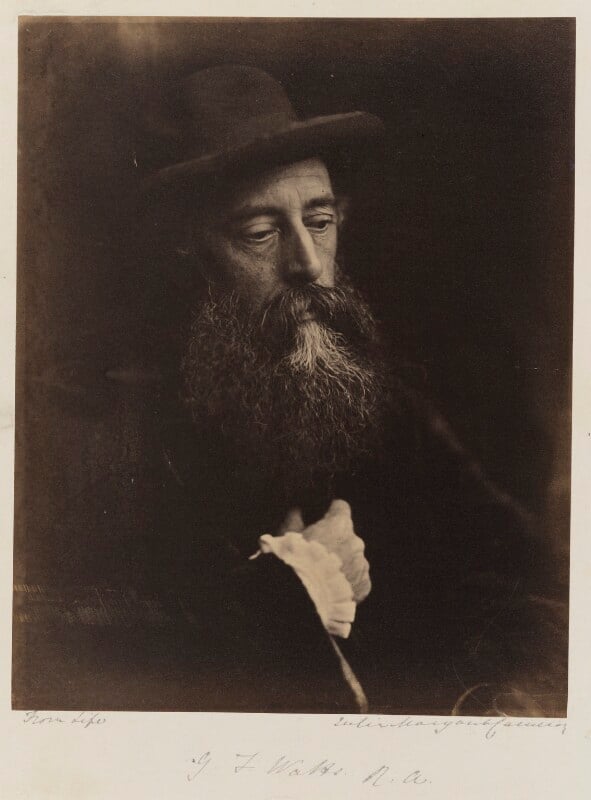 Cameron and Watts met in 1849 and maintained a close correspondence and friendship. Watts’s portrait of Cameron in oils is NPG 5046. She credited him as her artistic mentor and frequently referred to his praise of her work – sometimes inscribing quotations from his letters on mounts below her photographs. It has since remained rare to find an appraisal of her photography which does not include reference to him.

Over the years, Cameron made several photographic portraits of Watts, the first sequence in 1864 shortly after his marriage to Ellen Terry, of which four images were registered for copyright on 30 June 1864. [1] The present image was taken at Freshwater on the Isle of Wight later the same year and registered on 13 December, when it was described as ‘Photograph of G.F. Watts, 3/4 face, wideawake hat on head, eyes half down, frilled shirt over wrists’. [2] During this year, Cameron also produced portraits of Henry Taylor (NPG x18078) and Tennyson. Watts wrote, ‘Those of Tennyson are near being very good indeed but are not so fine as what you did of me.’[3] During 1865, two compositional images, of Watts holding a violin accompanied by two girls, The Whisper of the Muse, and a solo portrait [4] were registered, while an unregistered image of Watts with his latest painting (NPG P125) was also produced. In November 1866 a ‘life-size’ photograph of Watts was registered, followed in 1875 by a final portrait (‘Head looking down, figure draped, face almost profile’).

Though taken in her first year’s work as a photographer, NPG P215 has many hallmarks of Cameron’s later style which Watts paid compliment to in 1865 as ‘more like old pictures than ever’. [5] Both artists believed portrait photography should emulate painting in terms of composition, chiaroscuro and indistinct backgrounds.

Cameron appears to have been proud of the image; prints were included in albums she assembled for Henry Taylor, Anne Thackeray and Coutts Lindsay as well as the Herschel Album now in the National Media Museum, Bradford. The present print was signed by both artist and sitter, the latter signature greatly enhancing its value to contemporary collectors. It was purchased in 1982, together with Cameron’s portraits of Sir John Herschel (NPG P213) and Anthony Trollope (NPG P214) to replace those contained in the Herschel Album (originally acquired by the National Portrait Gallery in 1975 and subsequently presented to the NMM).