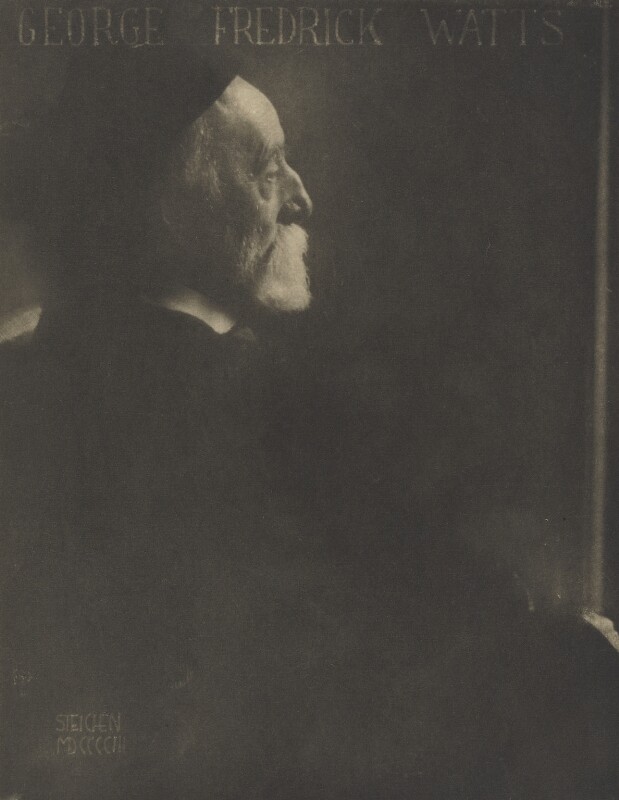 © The Estate of Edward Steichen/ARS, NY and DACS, London 2018

In 1900, Watts was aged 83 and the doyen of the art world, having outlived most of his contemporaries. He is shown here, in a photogravure from the American publication Camera Work, as a venerable figure whose profile features are illuminated by a single light source, perhaps a window. The pictorial style draws attention to the painterly composition and chiaroscuro derived from old master portraiture. In this respect, Steichen’s image – one of two poses from the same sitting – evokes an elderly version of Watts’s ‘Venetian Senator’ self-portrait of c.1853, although its immediate inspiration seems to be Watts’s profile self-portraits of 1879–80 (see ‘All known portraits’). [1] It has also been argued that Steichen’s admiration for European Symbolist painting is reflected in the composition, [2] and doubtless such admiration drew Steichen towards Watts, whose late allegorical paintings proved major contributions to the Symbolist impulse. The exact circumstances of this portrait-making remain somewhat unclear, however.

American photographer Edward Steichen travelled to Europe in summer 1900 to study painting in Paris. In September he visited London to submit work to the season’s exhibitions, as he recalled later:

In the early autumn I went to London with the idea of submitting some of my photographs to the exhibitions of the Royal Photographic Society and the Linked Ring. There I met F. Holland Day [who] was in London to arrange for an exhibition of what he called The New School of American Photography and the Royal Photographic Society had turned over their exhibition rooms to him. Now for the first time, I saw photographs by outstanding photographers. It was an exciting experience … After the fuss and excitement of London I was ready to get back to Paris and go to work. But before leaving, I made a photograph of the venerable painter George Frederick [sic] Watts. This was the beginning of the portrait series I had planned to make of distinguished artists in Europe. I hoped to include painters, sculptors, literary men and musicians. [3]

In this account Steichen does not explain why or how he was able to photograph Watts, or who furnished the introduction. No contemporary record of the encounter, which probably took place in Watts’s London home in Melbury Road, has yet been found. It is thought that Steichen was commissioned to make his portraits, but this may be a mistaken inference. However, further details of Steichen’s visit to London offer some context for the event.

At the ‘Photographic Salon’ organized by the Linked Ring [4] in the Dudley Gallery Steichen showed three works, [5] while at the more traditional Royal Photographic Society show in the New Gallery he had five items. [6] They were recognized as the work of a notable newcomer, with Whistlerian qualities. At the RPS Steichen was described as ‘a determined individualist [who] bursts upon the serenity of the Royal with five characteristic challenges’ and evident eccentricity. [7] A review of the Salon declared, ‘Edward Steichen of Milwaukee seems determined to be considered a stylist. Each work is signed in pencil with a self-satisfied monogram, suggestive of a narrow plank, the top and bottom of which hold an initial letter.’ It gave a balanced judgement, however: Steichen’s Self-Portrait was marred by ‘a graceless deshabille’ but in Nocturne no.12 ‘the head of the pianiste is in agreeable shadow, and the graceful arm and lithe figure are well denoted’. [8]

As it happened, the Linked Ring’s Salon display included a large print of one of Frederick Hollyer’s well-known portraits of Watts (NPG x129604). [9] Hailing Hollyer’s distinction, Photogram’s critic wrote, ‘So long as the camera can be so cunningly directed as to register such insight into character … the last word about portraiture does not rest with the painter’, going on to praise ‘the wonderful capture of the hand’ in his portrait of Watts. [10] It therefore seems possible that Hollyer’s image of Watts prompted Steichen’s portraits of the same sitter, especially as Steichen’s variant study of Watts shows his right hand resting contemplatively on his cheek.

Responding to British criticism of work by ‘The American School’, Steichen set out his aesthetic principles in an article published in London in January 1901, declaring:

It is evident that the greatest lesson the average photographer has to learn is to unlearn, and one of his first lessons would be to overcome the idea of a ‘sharp, brilliant’ photogram being a good one … [as] there is no absolute black and white to be seen in nature, the idea of such contrasts in a photogram somewhat dissolves. To some of us the lower tones have more of a tendency to make things beautiful than tones more brilliant … One strives for harmony – harmony in color [sic], in value and in arrangement.

Regarding portraiture, moreover, twilight, early morning and ‘dark grey days’ allowed for prolonged photographic exposure of up to a minute, during which ‘a series of [facial] expressions are apt to give something of a “composite” such as a painter would strive for. This for the character; then to make the result more than just the mere portrait, one arranges the masses and lines so as to form an interesting and artistic composition … achieved by the use of accessories, or the placing of lines and masses in the background.’ [11]

Steichen did not print or exhibit his portraits of Watts while in Europe, but he did continue the ‘portrait series’ project inspired by Watts. On returning to America in 1902 he described it to a Milwaukee newspaper, saying, ‘My “Great Men” series includes portraits of Rodin, Maeterlinck, George Frederic Watts, the eminent English artist, Zangwill, Lenbach the great German portrait artist … Mucha the painter and many others.’ [12] From the date ‘MDCCCCIII’ inscribed on both his Watts images, it would appear that Steichen prepared them for exhibition and/or publication in 1903, using the elaborate printing techniques then being developed. At the end of 1902 he was among the founding members of the Photo-Secession group in New York, under which aegis examples of his work appeared in Alfred Stieglitz’s quarterly publication Camera Work (which Steichen designed) as well as being exhibited throughout the United States. In the first issue of Camera Work, Stieglitz announced its aesthetic policy:

Photography being in the main a process in monochrome, it is on subtle gradations of tone and value that its artistic beauty so frequently depends. It is therefore highly necessary that reproductions of photographic work must be made with exceptional care, and discretion of the spirit of the original is to be retained, though no reproductions can do justice to the subtleties of some photographs. Such supervision will be given to the illustrations that will appear in each number of Camera Work. Only examples of such works as gives evidence of individuality and artistic worth, regardless of school, or contains some exceptional feature of technical merit, or such as exemplifies some treatment worthy of consideration, will find recognition in these pages. [13]

According to Catherine Coleman, ‘each photograph was to be judged for its aesthetic and formal qualities. In many cases, prints were signed and dated, following the painting model. Atmosphere and viewpoint took precedence over subject matter … painterly qualities were often achieved with the soft-focus lens, complex hand-printing processes and a free interpretation of what was on the negative, which might be rubbed or scratched for artistic effect.’ Hand-made and hand-coated papers were chosen, together with various pigment-based printing media. [14] In addition, Stieglitz tipped each photogravure into Camera Work by hand, touching up any spots or scratches as he did so. [15]

Professionally, Steichen thus aligned himself with photography’s avant-garde, which favoured ‘breadth of effect’ and ‘local treatment’ of negatives with matt and tinted varnishes, ‘papier-mineral’, ‘paint-brush or stomp’ and experiments in gum-bichromate. [16] In London, this had roused debate. An article in Photograms of 1900 attacked both the use of gum, which produced prints that looked like ‘a photo of a painting’, and alleged ‘photo-faking’ or re-touching, such as scratching the film to increase highlights. [17] Steichen responded in a short article on ‘Ye Fakers’, which argued that as exposure and developing were deliberately controlled ‘every photograph is a fake from start to finish’. Further manipulation – ‘marking, shading or tinting … stippling, painting and scratching … using glycerine, mop and brush’ – were all techniques deployed by the skilful photographer. [18]

The integral inscriptions on both Steichen’s images of Watts were probably traced onto the negative in reverse. They derive from his earlier artistic habit of signing each of his prints with a (‘self-satisfied’) monogram, and the conscious deployment of aesthetic presentation. The sitter’s name across the top is a conceit allusive of renaissance portraiture, also seen in contemporary British work (see for example, George Frampton’s self-portrait, NPG 3043 and Harold Speed’s portrait of C.F.A. Voysey, NPG 4116) as is the stylized signature and date. In both images, Watts’s middle name is misspelt ‘Fredrick’, a mistake perhaps arising from the fact that he was most commonly referred to as ‘G.F. Watts’.

Thus ‘manipulated’, the negative was then used as the basis for a photogravure, created by making a positive print from which an etched plate was made. All extant prints of the present work (see below) contain the same inscriptions, but a variety of printing media were used, variously described as ‘direct carbon’, ‘waxed platinum’, ‘gum platinum’, ‘gum-bichromate’ and ‘multiple process’. The present print is an original sheet from Camera Work, no.14 (for a comparable print see James Craig Annan’s photograph of William Strang, NPG P357). It is possible that it was prepared for publication in the second number of Camera Work, which contained eleven images by Steichen, but it eventually appeared in no.14 in April 1906, together with eight others by Steichen and further accompanied by a ‘Steichen Supplement’ with sixteen more images including portraits of Eleanora Duse, Maurice Maeterlinck, J.P. Morgan, and Auguste Rodin.

Over the subsequent decades of Steichen’s varied and renowned career, his portrait of Rodin overshadowed that of Watts, just as Watts’s own fame was eclipsed by Rodin’s, and it appears that the image remained relatively unknown in Britain. When Steichen’s retrospective exhibition was mounted at the Museum of Modern Art, New York, in 1961, the variant pose was selected for inclusion by the artist (see ‘All known portraits, Photographs, 1900, pose [b]’), and again included in the autobiographical volume A Life in Photography (1963) where his reminiscences of the 1900 visit to London were published. The present image was included in the 1978 reprint of Camera Work’s contents, and in Dennis Longwell’s Steichen: The Master Prints, 1895–1914: The Symbolist Period (Longwell 1978, pl.14), and the present print was purchased three years later. A larger original print sold in 1989 for $110,000.

A biography of Steichen by Penelope Niven (1997) talks of the Watts portrait on pp.86–7.