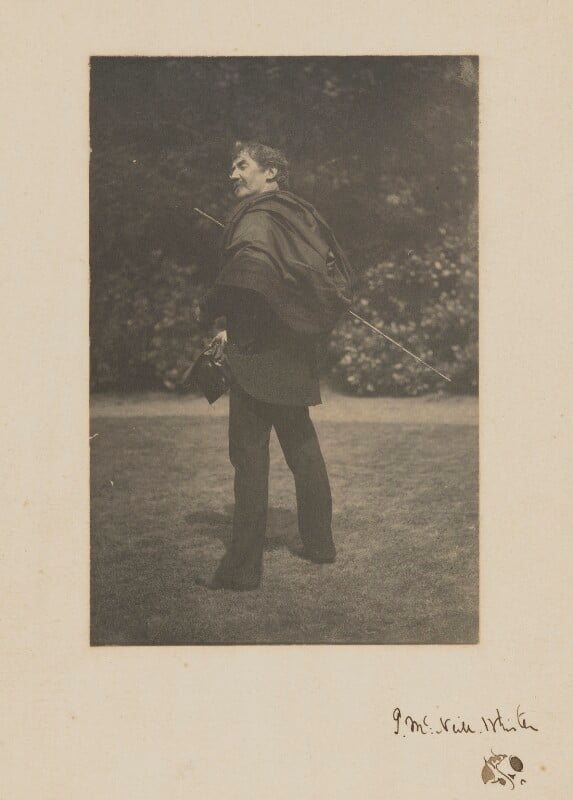 On the mount, signed in ink by sitter lower right-hand corner: ‘J. Mc: Neill. Whistler’ over a butterfly monogram.

This is one of a series of plein-air platinum print photographs taken by an unidentified photographer in London in 1885. The pose is awkward and Whistler squints over his shoulder against the sun. A similar pose showing him wearing the top hat was sold at Sotheby’s in 1977. [1] Other photographs from the same session show Whistler in a group with the artists William Merritt Chase and Mortimer Menpes; in all these images he is shown, as here, with monocle and walking stick and coat flung over his left shoulder. [2]

The photographs may be connected with the article W.M. Chase wrote about his time with Whistler in the summer of 1885. [3] He was struck by the contrast between the dandyish public figure, as seen here, and the artist’s appearance in the privacy of the studio:

The Whistler of Cheyne Walk was a dainty, sprightly little man, immaculate in spotless linen and perfect-fitting broadcloth. He wore yellow gloves and carried his wand poised lightly in his hand. He seemed inordinately proud of his small feet and slender waist; his slight imperial and black mustache were carefully waxed; his monocle was indispensable.[…] This was merely Whistler at play. The real, genuine Whistler had been at work since early morning, working like a fiend – and, in truth, looking like a fiend as he worked. The monocle of the night before had been laid aside for an unsightly pair of iron spectacles, so heavy that they were clumsily wrapped with cloth where they rested on his nose. His hair was uncombed; he was carelessly dressed. [4]

There is nothing to support Jeremy Maas’s suggestion that the series of photographs may have been taken by Menpes himself. [5] A reproduction of NPG P356 in The Times (17 July 1934) was captioned: ‘A photograph of Whistler … taken in the garden of his studio in The Vale, Chelsea’. [6] For the whole series see Gallatin 1918, nos 270–74; and for a discussion of this pose in Whistler’s iconography see Denker 1995, pp.114–20.