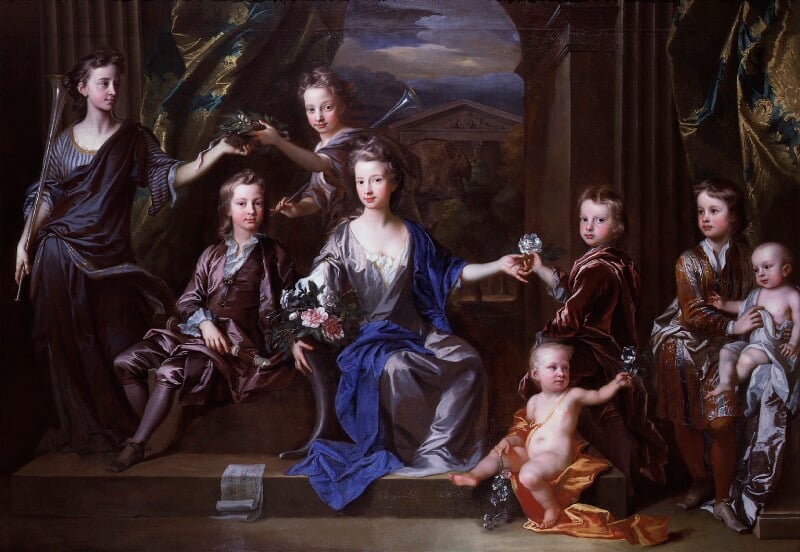 John Taylor MP had purchased Bifrons, near Canterbury, in 1694, just before NPG 5320 was painted. Of his children, Brook Taylor (who was to inherit Bifrons in 1729), was already distinguished by his studies of music and numbers when NPG 5320 was painted, and he became a famous mathematician. For his portrait attributed to Lewis Goupy (NPG 1920) and further iconography, see J. Kerslake, National Portrait Gallery, Early Georgian Portraits, 1977, pp 275-76.
First attributed to Closterman by Collins Baker in 1914. [1]
Rogers (1981) described NPG 5320 ‘with its sumptuous colouring and Frenchified elegance’ as ‘arguably Closterman’s masterpiece’; he also showed how the portrait elaborated the Taylor family motto, [2] Fama candida rosa dulcior: Olive and Margaret holding the attributes of fame - two trumpets and a wreath of orange blossom - with which they crown Brook, a prodigy of learning, and in the centre the seated Mary dispensing a white rose from her cornucopia, symbolic of the benefits of good fortune. The Taylor arms are said to be inscribed on the pediment of the distant temple. [3]
Closterman also painted half-length oval portraits of the children’s parents c.1695 (private collection). [4]

1 Bifrons was rebuilt in 1770 by the Rev. E. Taylor and demolished in World War II by the Marquess of Conyngham.
2 Bought at Sotheby’s by John Baskett for the Yale Center for British Art; an Export Licence was withheld and the picture bought by the NPG.