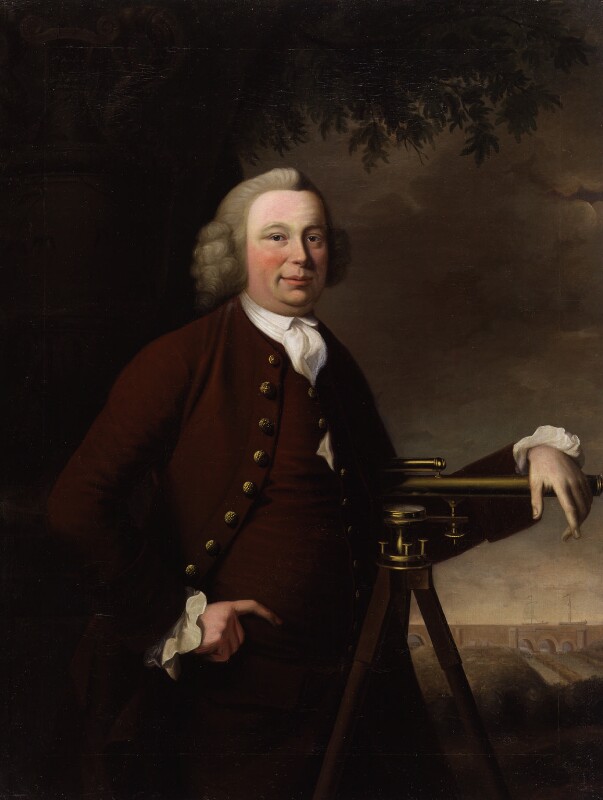 NPG 6170, according to the provenance and Dunkarton’s reversed engraving, [1] appears to be the original portrait by Parsons. It alludes to the Barton aqueduct on the Bridgewater canal, an undertaking which led to Brindley being described as ‘one of those great geniuses which nature sometimes rears by her own force, and brings to maturity without the necessity of cultivation’. [2] In 1769, just before Parsons painted him, Brindley had made his survey for the Chesterfield canal.
There was some dispute over the payment to Parsons, as Josiah Wedgwood told Thomas Bentley:

'Mr Parsons ... took Mr Brindley’s Portrait which he was to have had, but they had a little fracas about the terms, Mr Parsons demanded 60 guineas for the piece & frame, Mr Brindley meant to make Mr Parsons a handsome present for the picture, but did not like the mode of demanding so much from him, & in short told him he wod not have it. Mrs Brindley always wish’d to have the picture, & she begs you wod be so good to see Mr Parsons & tell him so, & that now she is at liberty, she readily complys with his terms, & hopes he will not refuse her the picture, if it is not already disposed of. She has set her heart much upon having it.' [3]
Bentley obliged and the widow got the portrait ‘after Parsons had made one or more copies’. [4]
Reversed copies, probably derived from Dunkarton’s engraving, are in the Potteries Art Gallery, Stoke-on-Trent Museum, [5] and with the Institution of Civil Engineers, London (half length, without hands). A version, probably autograph, showing variations in the left hand and background details, is in Salford Art Gallery and was several times engraved. [6] A Wedgwood medallion, for which there remains only documentary evidence, presumably also derived from the Parsons portrait. [7]

Blue eyes, grey powdered hair; wearing a white neckcloth, brown suit with brass buttons; with his theodolite1 and a view of the Barton aqueduct beyond.

The sitter’s descendant Charles Brindley Beddoe by 1886; 1 by descent to his grandson Patrick Matthews, from whom purchased 1992.

1 He wrote to Scharf, 25 May 1886 offering his portrait of Brindley painted ‘by Sir Joshua Reynolds at the request of the Duke of Bridgewater’. An old label verso bears the name Marrian Beddoe, a great-aunt of Matthews.