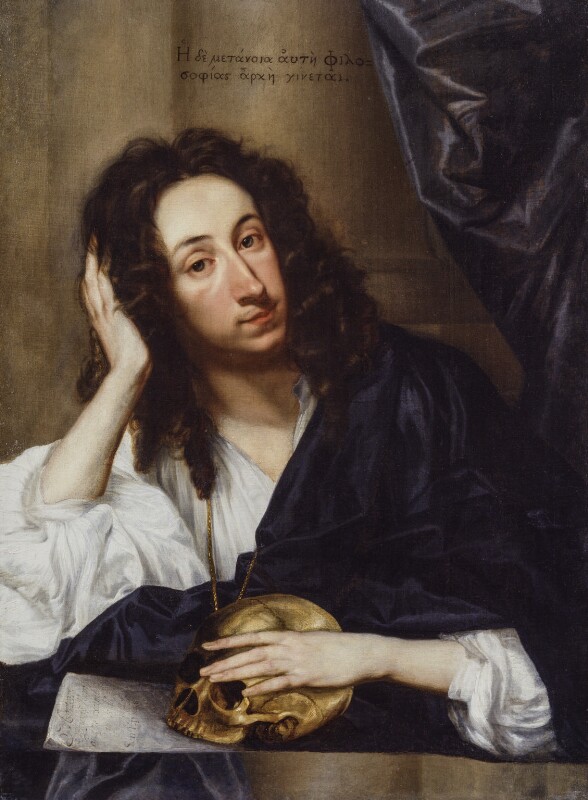 On 1 July 1648 Evelyn recorded retrospectively [1] ‘I sate for my Picture (the same wherein is a Deaths head) to Mr Walker that excellent Painter’. It was sent to his 13-year-old wife in Paris in September. Evelyn had married Mary Browne (c.1635-1709) in Paris on 27 June 1647; two months later he returned to England where he stayed until May 1649. Alone in England he composed Instructions Oeconomique, a confidential manual on the practice of marriage, which he sent his wife in September 1648 together with the portrait, telling her that he would have preferred a miniature ‘but since the late death of Oliver, and absence of Hoskins, Johnson and the rest, could meet with none capable’. [2] This could suggest he was originally shown holding a miniature (rather than a medal).
The changes to the picture were evidently made some time after 1648. Walker died in 1658 but the alterations need not be by him (would he have agreed to cut off the top of his composition?), although Evelyn’s description is ambiguous (see note 1). The changes, introducing an altogether more profound melancholy, were apparently inspired by Evelyn’s friendship with Jeremy Taylor, whom he met in 1655 and used ‘thenceforward as my Ghostly Father &c’. [3] Both quotations used in the portrait occur in Taylor’s Unum Necessarium [4] which Evelyn read in 1655, [5] suggesting the portrait was altered then or very soon after.

By descent in the sitter’s family; Christie’s, 10 April 1992, lot 12, bought by Artemis Fine Art, from whom purchased with help from the National Art-Collections Fund, the National Heritage Memorial Fund and the Dame Helen Gardner Bequest 1992.

On display in Room 6 at the National Portrait Gallery