1 of 8 portraits by (Edward) Onslow Ford 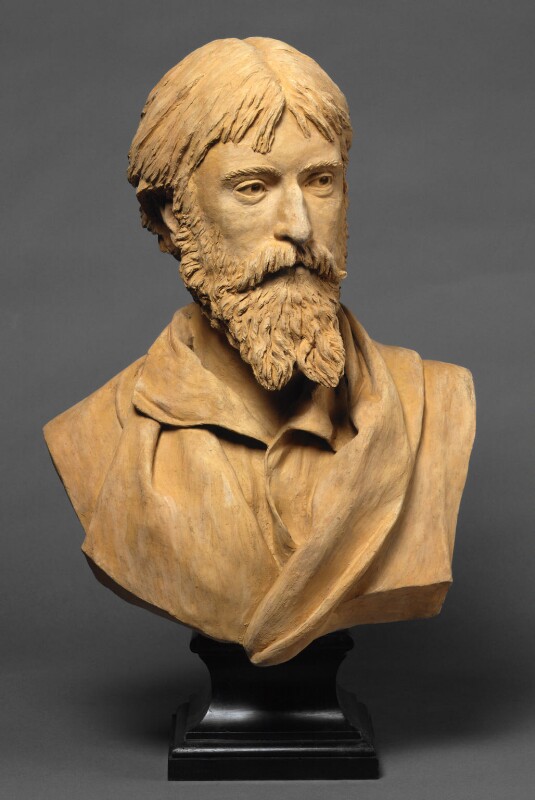 This is one of two near-identical, under life-size works by Edward Onslow Ford, executed at a date when both artist and sitter were rising figures in the art world. The two could have met in Munich, where Ford studied in the early 1870s and Herkomer was a frequent visitor, spending summers between 1871 and 1873 painting scenes of Bavarian peasant life. [1] Sittings probably took place in Herkomer’s London studio in Ebury Street, as Ford lived in Blackheath until 1879 and Herkomer was resident in Bushey from 1875.

It is likely that Ford was attracted to Herkomer’s distinctive features and forceful personality, as well as to the painter’s fame following the success of The Last Muster (1875).

Both busts are signed and dated 1877. One was exhibited at the Grosvenor Gallery in 1878 (235), where Herkomer’s work also appeared. The other (presumably) was shown at the Royal Academy in 1879 (1578), where it was noted by Tom Taylor in the Graphic, [2] without further comment, and by The Times as ‘among the busts most noticeable for subject and artistic treatment together’. [3] One of the two remained with the sitter and his successors at the Bushey art school (see ‘All known portraits, By other artists, 1877 [b]’), while NPG 6196 was perhaps purchased by Alfred Jones, of Bath, from whose collection it was acquired in 1924. [4]

Although he was better known for ideal subjects, Ford’s portrait busts were much admired and described as ‘speaking likenesses: in every instance the man himself ... is before you’. [5]

Alfred Jones, Bath, by whom deposited in 1924; transferred to Permanent Collection in 1993.