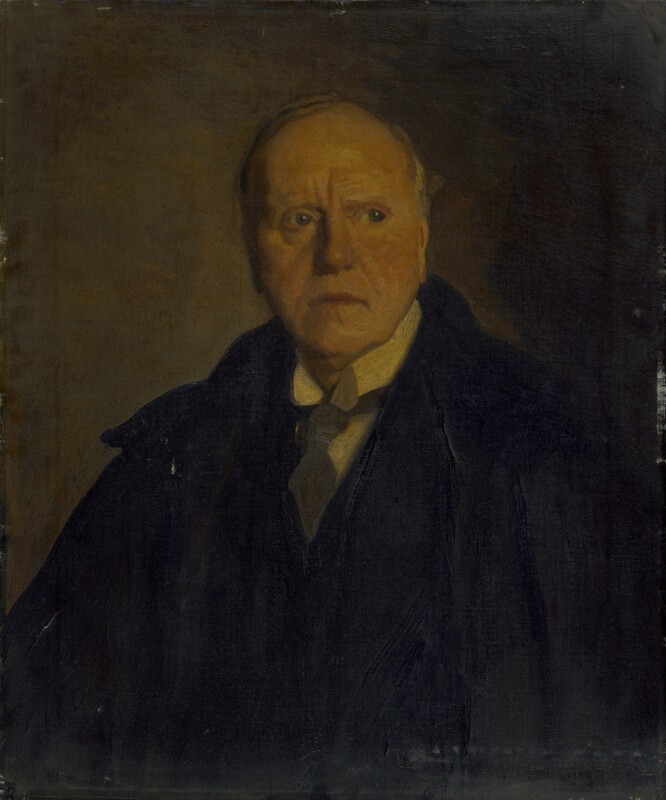 Viola Tree once described her father, Herbert Beerbohm Tree, as ‘very diffident about his looks’, [1] and this may be a factor behind his sparse private portraiture. She acknowledged this in 1937 when, her father not yet satisfactorily represented at the National Portrait Gallery, she was asked to advise on a portrait by Harrington Mann: ‘As there is no other portrait of my father (except the famous ones in costume – one at the Garrick Club and the other in the Vestibule of His Majesty’s Theatre) I have no choice but to say that the portrait by Harrington Mann is the best portrait painted of my father.’ [2]

Mann, born in Scotland and from the 1900s working much in America, was a fashionable portrait painter though never particularly associated with the theatre world. Artistic influences included John Singer Sargent, James Abbott McNeill Whistler and William Orpen; and Frans Hals was his ‘historic hero’, as seen in the twisted pose and blacks of this portrait of Tree. [3] In fact the Gallery was first notified of this ‘good portrait’ by Mann in 1934. [4] There may have been a whiff of doubt over Tree’s eligibility; certainly by the 1930s his style of theatre work was thoroughly out of favour: ‘We ought I think to have a portrait of B.T. though I’m not too sure,’ wrote the chairman of the Gallery’s Trustees to the director in January 1934. [5] The portrait (offer 23/1934) was declined on the grounds that ‘it was not very like ’[6] and returned to Mann’s studio, to the disappointment of Tree’s widow Maud. (It may be asked, though, why this portrait was still in the studio.)

In 1937, the year of Mann’s death, the painting, set into a fine carved giltwood frame, was again offered to the Gallery, this time as a gift from Francis Howard of 11 Carlton House Terrace (offer 157/37). [7] Alerted to the existence of a lively charcoal sketch by Sargent belonging to Viola Tree – though this was never on offer – the Trustees declined the painting for a second time. [8] However, ‘owing to an oversight’ Mann’s portrait of Tree was not returned to Howard; [9] it was eventually accessioned by the Gallery in 1993. [10] Apparently never conserved or displayed, the painting remains in poor condition.