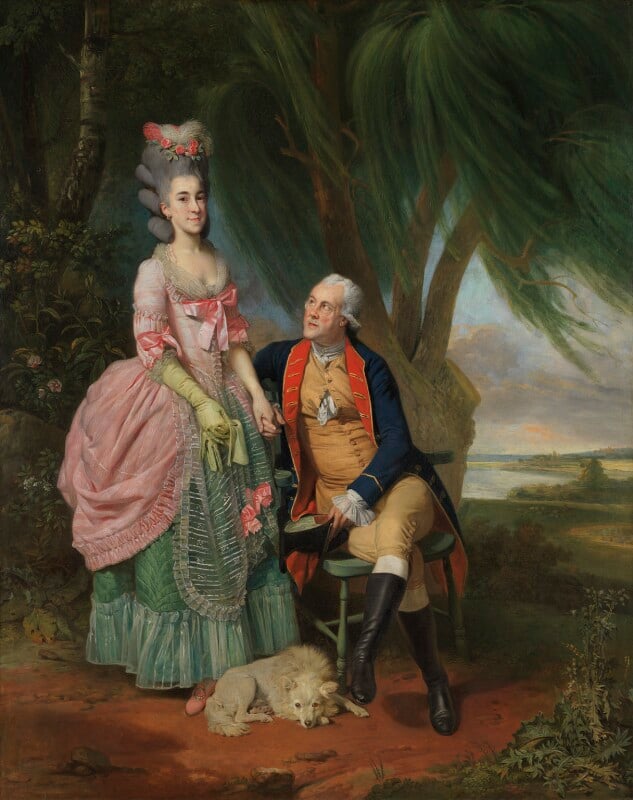 Wilkes’s lasting devotion to his daughter Mary (Polly, 1750-1802), his only legitimate child, was one of the less complicated aspects of his character. The fact that Mary seems ‘fussily overdressed and lacking in any innate sense of style’ [1] may be a reflection of her father’s indulgence. Walpole saw NPG 6133 in Zoffany’s studio in November 1779: ‘A delightful piece of Wilkes looking - no, squinting tenderly at his daughter - it is a caricature of the Devil acknowledging Miss Sin in Milton. I do not know why, but they are under a palm tree, which has not grown in a free country for some centuries’. [2] When it was shown at the RA three years later Walpole found it ‘horridly like’. [3] The sleeping pomeranian dog was Zoffany’s, and recurs in Zoffany’s Sharp Family of 1779-81 (on loan to the National Portrait Gallery since 1978; L169).
Mary Wilkes studied in Paris 1763-64 and stayed there again in 1770; well-educated, but evidently plain, she was unmarried; she appeared in an anonymous caricature group, A Sunday Concert 1782, smiling at Dr Burney [4] and she also bequeathed her portrait ‘done in crayons by Hoare’ to Lady Baker. [5]

Wilkes has brown squinting eyes, white hair, and wears a dark blue coat with red facings and gold trim (possibly a uniform coat),1 buff vest, nankeen breeches and black top-boots; he sits in a green chair, holding his black hat in his left hand.
His daughter has brown eyes, her grey hair dressed with red roses and ostrich feathers, pink silk roses and foliage; she wears a green quilted underskirt with a lace apron and a pink and white panelled dress with silver decoration and pink bows on the sleeves; her gloves are pale green and her pink shoes have silver buckles.

By descent from the sitter to his niece, Dinah Hayley, who married Sir Robert Baker, 1st Bt;1 by descent to Sir Robert Sherston-Baker, 7th Bt; Sotheby’s, 14 November 1990, lot 47, bought in; purchased by private treaty sale with the aid of National Heritage Memorial Fund and the National Art Collections Fund 1991.

1 Mary, Wilkes's daughter, directed in her Will: 'I give to my aforesaid cousin, lady Baker, the picture, by Zoffany, of my dear father and myself' (J. Almon, Correspondence of John Wilkes, 1805, V, p 114).